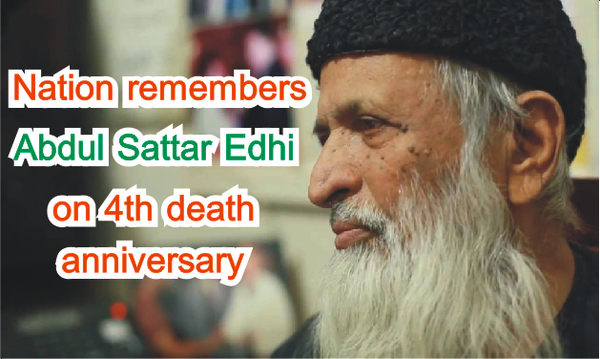 The nation on Monday commemorated the services of prominent philanthropist Abdul Sattar Edhi on his third death anniversary. The iconic humanitarian was born on February 28, 1928, in Gujarat before the partition of the sub-continent. He breathed his last on July 8, 2016, at the age of 88 in Karachi. Edhi started welfare services in 1951 and later established the world's largest volunteer ambulance network along with homeless shelters, animal shelters and orphanages across the country.

Edhi won respect from every stratum of society for an ascetic lifestyle that was devoted to helping the poor regardless of their background. “When my ambulance takes a wounded person who is in pain to the hospital, when people reach the hospital, I find peace in knowing I helped an injured person who was in pain,” Edhi told in an interview in 2013. “My mission is to love human beings … Each day is the best day of my life.” Edhi was honoured with several awards for his selfless services in the cause of humanity, both on the national and international levels.