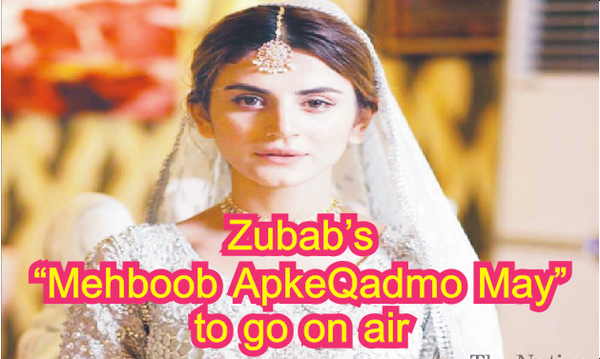 Karachi - Rising star, model turned actress Zubab Rana will be gracing our screens once again, in a lead role in “Mehboob ApkeQadmo May”, scheduled to go on air this October. Starring as Sunaina; Zubab Rana plays an innocent girl who would be stuck in a love triangle with some major twists and turns. The story centers on the evils of black magic, and the consequences it can lead to, turning your world upside down. Written by Imran Nazir and directed by Furqan Adam, the drama is produced under the banner of Moomal Entertainment and MD Productions.

“After the blockbuster success of Bandish, I am excited to be working on another supernatural themed project, and this time for Hum TV where I made my acting debut from,” said the lovely Zubab Rana. Zubab Rana is currently winning hearts with her performance in the hit drama “RishtayBiktay Hain” that airs every Monday-Wednesday at 9 pm on ARY Digital.