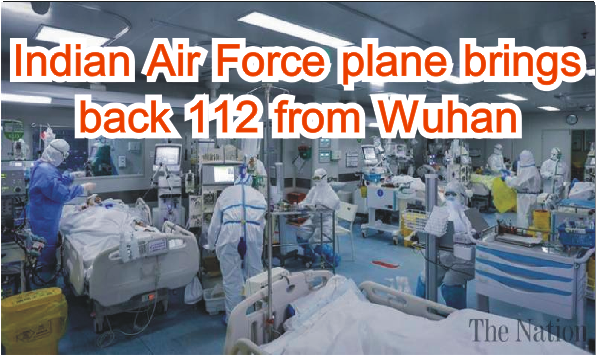 After delivering medical aid in Wuhan, the epicenter of the coronavirus outbreak in China, an Indian Air force (IAF) plane brought back 112 people from the city, officials said Thursday. “On its return from Wuhan, the IAF flight has brought back 76 Indians & 36 nationals from 7 countries - Bangladesh, Myanmar, Maldives, China, South Africa, USA and Madagascar. Appreciate facilitation by Chinese government,” India’s External Affairs Minister S Jaishankar said on Twitter. “Consignment (15 tonnes) of Indian medical relief for #COVID19 lands in Wuhan. Strong expression of our solidarity with the Chinese people at this difficult time. Thank you @IAF_MCC and @EOIBeijing for your efforts,” Jaishankar added, referring to the official name for the novel coronavirus.

Separately, Jaishankar said that 119 Indians and five foreign nationals who were quarantined on board the Diamond Princess cruise ship berthed in Yokohama, Japan have landed in New Delhi. “Air India flight has just landed in Delhi from Tokyo, carrying 119 Indians & 5 nationals from Sri Lanka,Nepal, South Africa&Peru who were quarantined onboard the #DiamondPrincess due to #COVID19. Appreciate the facilitation of Japanese authorities. Thank you @airindiain once again,” he tweeted.

A statement issued by the Embassy of India in Beijing said that in response to a request from the Chinese side, India mounted a relief assistance flight to Wuhan on Feb. 26 with an Indian Air Force aircraft that brought over 15 tons of medical assistance.  “On its return flight to New Delhi, the aircraft also airlifted 76 Indian and 36 foreign nationals,” it said.  The statement said all evacuated passengers will undergo 14 days of quarantine on arrival in India. “All those on the first two flights have tested negative for COVID-19 and have since left the quarantine facilities,” it said. “The passengers on board the third flight will also undergo a similar quarantine on arrival in India.”