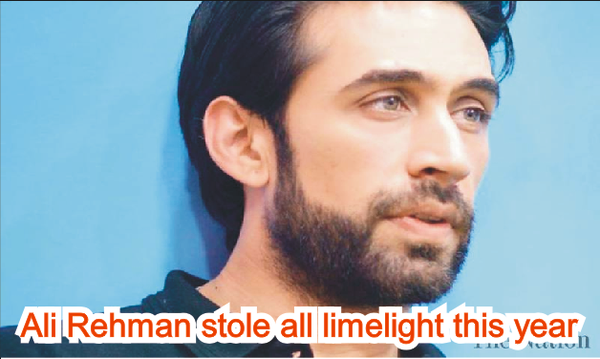 LAHORE - Celebrated as the style icon of Pakistan’s youth, the young sensation “Ali Rehman Khan” with his exceptionally gorgeous looks, is recognized as one of the finest talents of Pakistan and has made a household name in a very short span of time. With his charming looks and funny persona, Ali Rehman Khan has been a fan favorite ever since the start of his career in the industry. The extremely passionate actor was associated with theatre since 2004 and then transitioned to the silver screen in 2013 followed by his debut on the big screen in 2016.

Ali’s journey is laudable as an actor and his progression from theatre to dramas, and then finally, making his way to movies is commendable. The Industry’s heartthrob is recognized for his playful, sweet and romantic characters.  However, his versatility needs no introduction anymore after his enactment in the drama serial “Khaas” where he takes on the character of Amar - an emotionally abusive narcissist – getting him rave reviews from critics.  The character is quite different from the roles that Ali has portrayed so far. His semblance in Khaas has become the talk of the town since first episode.

Appearing on the big screen at the same time, the handsome hunk has taken the industry by storm with his recent rom-com “HeerMaanJa” which has been the biggest hit among the three films released on this Eid ulAzha. The hero is still making headlines for his flawless acting skills in the movie.

After winning the audience and the box office, the talented Ali Rehman Khan is ready to showcase his acting prowess with the drama serial, Bewafa. Though Ali has gained some rave reviews for all the characters he has depicted so far, it’s his recent role as an unfaithful husband in “Bewafa” - he is being currently applauded for – a character that resonates with our everyday lives and who could have performed it better than Ali Rehman Khan?

To top it all off, Ali Rehman Khan has just been announced to host the Hum Awards for the third time happening in Houston. Hum Awards are truly one of the most anticipated events of the year and we can’t wait to see this dapper to spread his magic once again! 2019 has proven to be an uber successful year for Ali, opening from his critically acclaimed character Ammar in Khaas followed by the box office success HeerMaanJa, and now his third project Bewafa, followed by his hosting in Hum Awards.