Ali Rehman winning hearts with his performance in ‘Bewafa’ 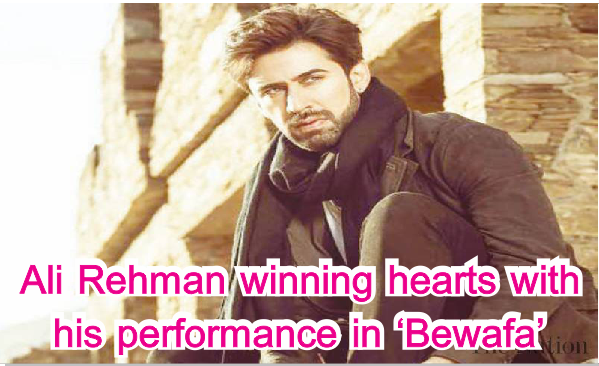 After winning hearts with his amazing performance as a narcissist in Khaas, Ali Rehman is taking over our screens once again in a drama, titled Bewafa in a different kind of role. In Bewafa, Ali is seen playing the character of an unfaithful husband of Naveen Waqar and marries Ushna Shah secretly. Directed by AabisRaza, and produced by Fahad Mustafa and Dr Ali Kazmi, Bewafa is making waves because of its unique new storyline and brilliant performances by the ensemble cast. The recent episode of Bewafa was a happening one as Kinza, played by Naveen Waqar, gets to know about her husband’s secret marriage and she was devastated. She is shocked and confronts Ahaan, her husband, played by Ali Rehman. Ahaan knows that he has done something unforgivable for his wife and has some guilt too, but he also feels that he has done it to save Shireen, as Shireen has made him believe that.

The scenes were intense and emotional, which required a lot of skills and talent to portray those mixed emotions that Ahaan was going through, as he was questioned by his wife, and Ali nailed them completely. Whether it was the confrontation scene between Kinza and Ahaan, or the scene in which he tries to convince his mother to talk to Kinza on his behalf and explain the entire situation, or the scene in which Kinza asks him to bring Shireen to their house, Ali’s expressions and body language were totally on point and note-worthy. He depicted all those expressions with perfection and brought out Ahaan’s emotional condition skillfully. Now that Ahaan will be bringing Shireen to his house and with Kinza also living in the same house, things will start rolling. Looking forward to see what Ali Rehman has in store for us in Bewafa, and how well he brings Ahaan’s struggles to the screen.