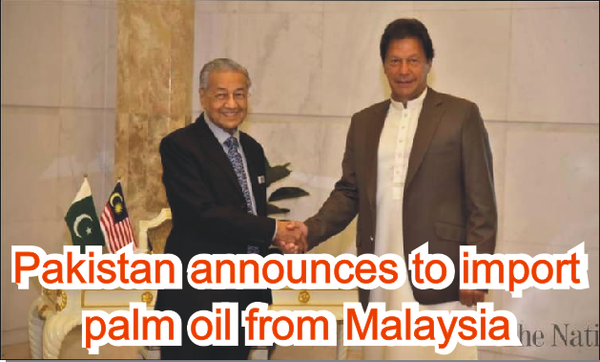 Prime Minister Imran Khan on Tuesday announced they would import palm oil from Malaysia to compensate the Indian action to restrict its purchase from Malaysia. "We have noticed that India threatened Malaysia to cut import of palm oil for supporting the Kashmir cause, so Pakistan will do its best to compensate Malaysia for that," visiting Pakistani Premier Imran Khan told a joint news conference alongside his Malaysian counterpart Mahathir Mohamad in Kuala Lumpur. Before addressing the reporters, the two leaders had one-on-one talks and meetings with delegations.

Mahathir, for his part, said that they discussed palm oil issue and Pakistan is quite ready to import it from Malaysia. Last year, India restricted the import of palm oil from Malaysia as part of its retaliation against the southeast Asian nation for criticizing New Delhi on Kashmir and its new citizenship law.

Mahathir said New Delhi "invaded and occupied" Jammu and Kashmir during his UN General Assembly address in September, and refused to budge from demanding the UN to intervene to solve the dispute. Pakistani premier, accompanied by a high level delegation, arrived in Kuala Lumpur on Monday for a visit. On skipping the Kuala Lumpur summit in last December, Khan said he was sad for not attending the conference.

“… unfortunately our friends who are very close to Pakistan felt that the conference somehow was going to divide the ummah, but it was clearly a misconception, because that was not the purpose of the conference and that was evident from when the conference took place," Khan said.