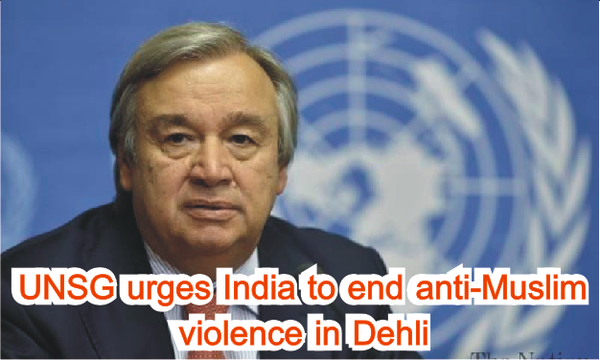 UN Secretary-General Antonio Guterres has urged Indian leaders to invoke the “spirit of Gandhi” to bring about an end to the violence in New Delhi against Muslims protesting the new citizenship law so as to pave the way for communal harmony, according to his spokesman. “Throughout his life, the secretary-general has been deeply inspired by the teachings of Mahatma Gandhi and today the spirit of Gandhi is needed –more than ever and it is essential — to create conditions for true community reconciliation,” Spokesman Stephane Dujarric said in response to a question at UN Headquarters in New York on Thursday.

He said the UN chief had been following the situation and was “saddened by the reports of death that we have seen over the past few days in New Delhi.” The Secretary General “again reiterates, as he has done in other places, his calls for maximum restraint and violence to be avoided,” Dujarric added. According to latest figures, at least 38 people have been killed as Hindu mobs attacked mosques, residences and businesses during demonstrations against the Citizenship (Amendment) Act, which discriminates against Muslims.