Anti-polio campaign resumes after being suspended since four months 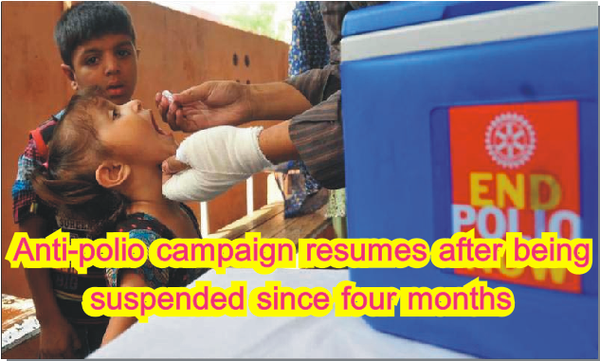 The anti-polio campaign which was suspended since last four months due to corona virus will be started again from Monday. The polio campaign in its first phase will be run in some areas of Faisalabad, Attock, South Waziristan, Karachi and Quetta. During this polio drops will be given to the 0.8 million children under the age of 5 years, whereas separate campaign will be commenced for the remaining children.

The number of children affected by polio has reached to 60 throughout the country during this year. 16 polio cases came forward during this year in Balochistan. The polio campaign has been badly affected because of coronavirus, due to which number of polio cases has been increased. That is why the government has decided to start the polio campaign again in accordance to the SOPs.