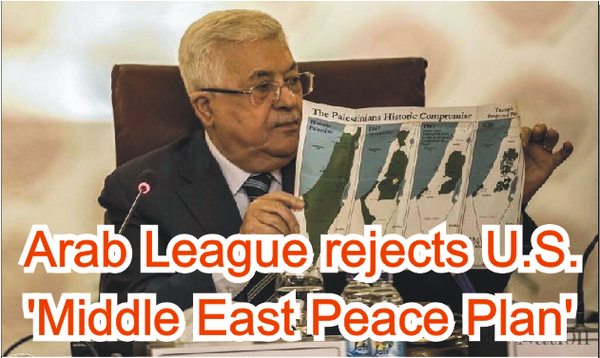 At the Arab League emergency meeting held on Saturday in Cairo, Arab foreign ministers voiced rejection to the recently released U.S. Middle East Peace Plan. "Rejection of the U.S.-Israeli Deal of the Century comes as it does not fulfill the minimum rights and aspirations of the Palestinian people," said the final communique issued by the foreign ministers following the meeting.

The statement described as "unfair" the peace deal, announced on Jan. 28 by U.S. President Donald Trump in the presence of Israeli Prime Minister Benjamin Netanyahu. The U.S. vision of the Israeli-Palestinian peace process includes annexing the disputed holy city of Jerusalem as Israel's "undivided capital" while the Palestinian capital will include areas on the outskirts of East Jerusalem. The final statement of Arab foreign ministers agreed to boycott the U.S. "unfair deal" and not to cooperate "in any way" with the United States in its implementation. The U.S. plan "violates the references of the peace process based on the international law and the relevant United Nations resolutions," the Arab ministers added. They also highlighted the Arab Peace Initiative endorsed by the Arab League in Beirut in 2002 as the minimum acceptable limit to achieve peace "through ending the Israeli occupation of all Palestinian and Arab territories occupied in 1967 and the establishment of the independent, sovereign state of Palestine with East Jerusalem as its capital." The final statement agreed on "sticking to peace as a strategic option to settle the conflict," underlining the necessity of the two-state solution as the basis of the peace process. They warned Israel against implementing the Trump-proposed deal unilaterally, reaffirming full support for the struggle of the Palestinian people and its leadership.

The meeting of the Arab League council at the level of foreign ministers was attended by Palestinian President Mahmoud Abbas and Arab League Secretary-General Ahmed Aboul-Gheit. Ahead of the meeting, Abbas said the U.S. deal is "completely rejected once announced," vowing to cut ties with Israel and the United States over the deal. For his part, the Arab League chief described the U.S. deal as "disappointing," adding it marks a sharp turn in the U.S. foreign policy regarding the Middle East peace process. "It is not in favor of peace or a permanent and just solution," said Aboul-Gheit. The United States, Israel's main backer, officially recognized Jerusalem as Israel's capital in late 2017 and moved its embassy from Tel Aviv to the holy city in May 2018. The Palestinians seek to establish an independent state with East Jerusalem as its capital in the light of the UN-proposed two-state solution based on the 1967 pre-war border.