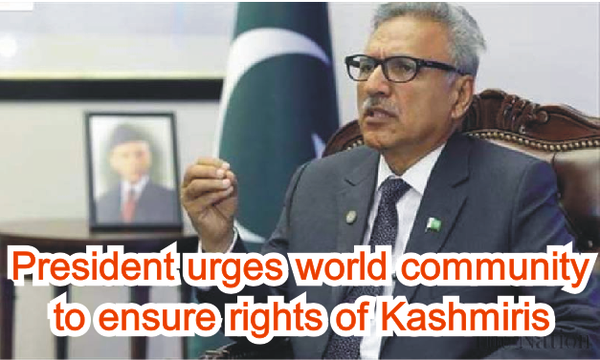 President Dr. Arif Alvi Saturday said peace is not only the priority of Pakistan but that of the entire world also as it a guaranteed people's prosperity and development of countries. He was addressing an event on 'Youth mobilization on Peace Building' participated by foreign students visiting Pakistan under International Students Week in Pakistan in Lahore. The President said when Pakistan Tehreek-e-Insaf came into power, the Prime Minister Imran Khan took charge of the office, his first message was about peace. On the other hand the people of occupied Kashmir are under great stress and trauma as they are being denied even their basic rights by India.

He said the world community would have to play its effective role to bring peace in the held valley ensuring the rights of Kasmiris. Dr. Arif Alvi said it is easy to start a war but it has its own dynamics as once started it even went out of control of its perpetrators. Since the war is not a solution to any problem, so the world community must have to make joint efforts for resolving global issues in a peaceful manner. The president said Pakistan is a peace-loving country, which always welcomed everyone, and has been playing its due role in resolving the global issues including peace and global warming. He said Pakistan is a youth hub having great potential to help resolve the global issues.