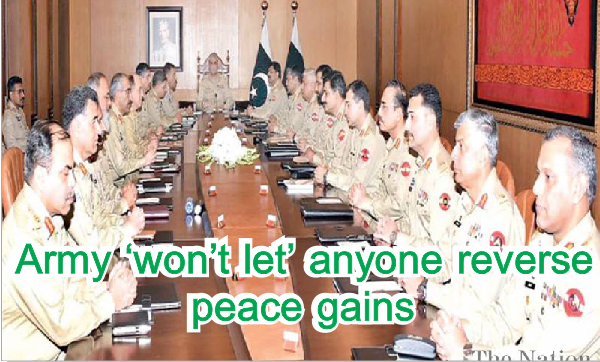 RAWALPINDI - In the wake of on-going turbulent political situation in the capital, Chief of Army Staff General Qamar Javed Bajwa Monday said that they will not let anyone reverse the security gains only to “suit any vested agenda”. Addressing the 226th Corps Commanders Conference at the General Headquarters (GHQ), the army chief also said that Pakistan Army as a state organ would continue to support national institutions “as and when asked as per constitution.” He urged unity among all national stakeholders on major national issues to defeat “inimical forces”, according a statement issued by Director General Inter-Services Public Relations (ISPPR) Maj Gen Asif Ghafoor.

The meeting of the army high command was presided by General Bajwa and it reviewed geostrategic and national security environment, the military spokesperson said. The forum also discussed internal security and situation along the Eastern Border [with India] and the Line of Control [in Kashmir] as well as current state of affairs in the Indian Occupied Jammu & Kashmir. The commanders expressed firm resolve to defend the country against full spectrum threat, the statement said.

A few days earlier, army had said it is an impartial institution and supports all elected governments in accordance with the law and the constitution. Speaking to a TV channel on Friday, after JUI-F chief Fazlur Rehman, without naming army, accused it of backing the PTI government, DG ISPR said Army rejected the impression. He warned that no one would be allowed to destabilise the country at any cost.