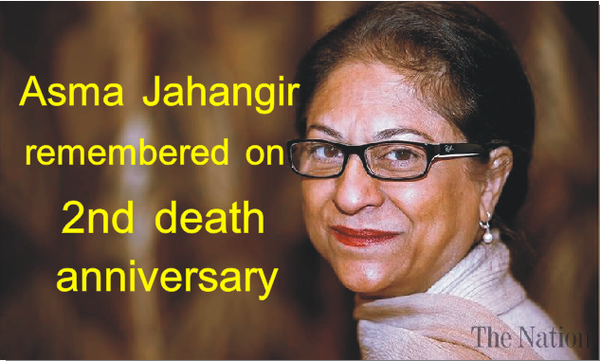 Death anniversary of eminent human rights activist and lawyer Asma Jahangir is being observed on Tuesday. Born and raised in Lahore, Asma Jahangir was known for playing a prominent role in the Lawyers' Movement and served as the United Nations Special Rapporteur on Freedom of Religion or Belief and as a Trustee at the International Crisis Group. She was imprisoned in 1983 for participating in the Movement for the Restoration of Democracy against the military regime of Zia-ul-Haq.

In 1986, she moved to Geneva, and became the Vice-Chair of the Defence for Children International. Asma Jahangir received several awards including Right Livelihood Award, Freedom Award, Hilal-i-Imtiaz, Sitara-i-Imtiaz, Ramon Magsaysay Award, Martin Ennals Award for Human Rights Defenders and the UNESCO/Bilbao Prize for the Promotion of a Culture of Human Rights. She was posthumously awarded the Nishan-e-Imtiaz, the highest degree of service to the state, and for services to international diplomacy by President of Pakistan.