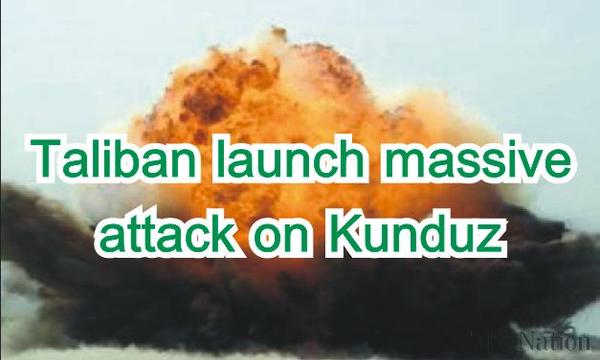 KABUL    -   The Taliban have launched a new attack on one of Afghanistan’s largest cities, Kunduz, the government said on Saturday, even as the insurgent group continued negotiations with the US on ending America’s longest war.
The militants, who have demanded that all foreign forces leave the country, now control or hold sway over roughly half of the country and are at their strongest since their 2001 defeat by a US-led invasion. Some 20,000 US and Nato forces remain in Afghanistan after formally ending their combat role in 2014. They continue to train and support Afghan forces fighting the Taliban and a local affiliate of the Islamic State group.
Presidential spokesman Sediq Seddiqi said Afghan security forces were repelling the attack in some parts of the city, a strategic crossroads with easy access to much of northern Afghanistan as well as the capital, Kabul, about 335 kilometres away. “As always the Taliban have taken positions in civilian areas,” Seddiqi said on Twitter.
The Taliban were in control of the city’s hospital and both sides in the ongoing fighting had casualties, provincial council member Ghulam Rabani Rabani told The Associated Press. He could not give an exact number. The Taliban launched the “massive attack” from several different points around the city overnight, said Sayed Sarwar Hussaini, spokesman for the provincial police chief. “I can confirm that intense gun battles are going on around the city, but the Taliban have not been able to overrun any security checkpoint,” he said.
Reinforcements had arrived in the city and Afghan air force was supporting ground forces, Hussaini said. Taliban spokesman Zabihullah Mujahid in a Twitter post called the latest attack “large-scale”. A Taliban suicide bomber has struck a main square in the northern city of Kunduz, where Afghan forces had gathered to defend the city from falling to the armed group, officials told Reuters news agency.
Esmatullah Muradi, a spokesman for the provincial governor of Kunduz, said on Saturday evening that there were initial reports of casualties but no details. Shortly before the suicide bombing, President Ashraf Ghani claimed the Afghan security forces “repelled” the coordinated Taliban assault on Kunduz amid competing claims from both sides.
Officials said the fighting started around 1:00 am (2030 GMT on Friday), when Taliban attackers advanced on the city from several directions. Afghan military reinforcements were rushed in to prevent the Taliban from taking control of the city. Local officials said at least three civilians and 30 Taliban fighters have been killed.
Gunfire could be heard across Kunduz, the capital of Kunduz province near the Tajik border, and as the day wore on, both sides claimed units from the other’s forces were surrendering. But by Saturday evening, the Afghan government said it had gained the upper hand. “The Taliban attacked Kunduz today and caused damages to civilians and their houses. They wanted to create an atmosphere of fear in the city,” Ghani said in a statement. “Their attack was repelled by our brave security forces.”
A few hours earlier, Taliban spokesman Zabihullah Mujahid claimed Saturday’s attack had resulted in the capture of several important structures. “The Taliban attacked Kunduz city from several directions this morning. We are in the city now capturing government buildings one after the other,” he told reporters. Interior ministry spokesman Nasrat Rahimi said “hundreds of Taliban terrorists had been killed”, but there was no way to immediately verify the claim. “The situation is under control in Kunduz but clearing operation is ongoing,” he said.
On Thursday, a US commando was killed in the southern province of Zabul, marking at least the 15th American combat deaths in Afghanistan this year. The Taliban attack shows they “don’t believe in the peace opportunity provided by the US and the government of Afghanistan”, Ghani’s spokesman Sediq Sediqqi said on Twitter. “On the one hand they are talking with the US, on the other hand they are attacking people’s houses and villages. We will not leave their attack unanswered.”
The Taliban have continued bloody assaults even as their leaders meet with a US peace envoy in Qatar to negotiate an end to nearly 18 years of war. Talks continued on Saturday. Both sides in recent days have signalled they are close to a deal. The US for its part seeks Taliban guarantees that Afghanistan will no longer be a launching pad for terror attacks such as the September 11, 2001, attack on the US by Al-Qaeda. The Taliban government had harboured Al-Qaeda leader Osama bin Laden.
Many Afghans worry that an abrupt departure of foreign troops will leave Afghan forces vulnerable and further embolden the Taliban, who already portray a US withdrawal as their victory. The Taliban seized Kunduz, at the heart of a major agricultural region near Tajikistan, for around two weeks in 2015 before withdrawing in the face of a Nato-backed Afghan offensive. The insurgents pushed into the city centre a year later, briefly raising their flag before gradually being driven out again.