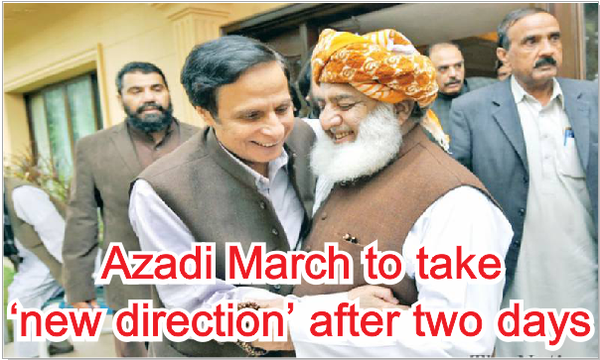 ISLAMABAD    -    The Opposition’s Rehbar Committee on Thursday announced that the Azadi March will take a new direction after two days. Jamiat Ulema-e-Islam-Fazl (JUI-F) chief Maulana Fazl Rehman yesterday welcomed the statement of DG ISPR that the Army would remain impartial. Addressing the marchers here, Maulana Fazl maintained that the people gathered here were staunch supporters of the institutions and the institutions should give them some respect. He also urged the government’s team formed for talks with the opposition to avoid meaningless dialogues with them and bring the Prime Minister’s resignation with them; saying there was no other option for them. He further said that they will keep protesting till the resignation of the PM, “Now the government has to decide whether to go or face the protest of hundreds of thousands of masses across the country.”

Lashing out at the government, he said the government now was talking about NRO to the opposition and added “Now we are not giving any NRO to the government and will get their desired and ultimate goals”. He said the government had summoned thousands of police force from around the country and roads had been blocked by placing containers on roads which had caused a huge loss to the country’s economy. He claimed the 2018 elections were rigged and the mandate of the opposition was stolen. He maintained that the participants of the March should be taken seriously as they were not here for enjoyment but for their basic and fundamental rights. He claimed they had taught the youngsters how to be moderate instead of following the way of aggression and extremism.

Earlier, the opposition’s Rehbar Committee announced to switch to the Plan-B of the Azadi March in order to mount pressure on the government. Addressing media persons after Committee meeting, JUI-F leader and convener of the committee Akram Khan Durrani said all the political parties had unanimously decided to multiply pressure on the government. Durrani said the march would take a new direction after two days; adding the committee was thinking over three recommendations given by its members. He further stated that the workers were determined and were even ready to stay in the capital for two to three months. Meanwhile, PPP senior leader Farhatullah Babar has also said that the opposition wanted to put more pressure on the government.

However, a source in the JUI-F told The Nation that the party leadership had now decided to execute the Plan-B.Elaborating on the plan, he said under the plan, which was likely to be executed side by side with the sit-in in the capital, workers of the opposition parties would lock down the districts across the country. Talking about the option of collective resignations from parliament belonging to the opposition, he said the JUI-F parliamentarians had already submitted their resignations to the party chief. “Now, the JUI-F leadership would try to convince the PPP and PML-N high-ups to ask their members to also submit their resignations,” he added. The source further said that the opposition also has a plan to move an impeachment motion against the President of Pakistan.However, a senior PPP leader denied the matter was under consideration as yet.

On the other hand, Punjab Assembly Speaker Chaudhry Pervaiz Elahi called on JUI-F chief Maulana Fazlur Rehman here at the latter’s residence on Thursday. Talking to the media after the meeting, Elahi said the government would continue to negotiate with the opposition until the issue was resolved; saying that he was hopeful about the positive outcome of the talks. He revealed that presently things were on the right track, and the nation would hear good news very soon. Elahi said the government would hold talks with the opposition on every issue, including the formation of the judicial commission to probe allegations of rigging.

It is pertinent to mention here that PM Imran Khan has given full powers to Ch Pervaiz Elahi to hold talks with Maulana Fazlur Rehman and they both have held four meetings in the last two days. Later, talking to a private TV channel, Pervaiz Ellahi said the PTI leadership would not resign on the demand of JUI-F. No talks would be held on prime minister’s resignation as it is out of question, he made it clear.

There can be negotiation on strengthening Election Commission of Pakistan and parliamentary committees and so on, he added. In reply to a question, he said a judicial commission can be constituted for the opening of a constituency. “We have forwarded the reservations being raised by the members of JUI-F committee,” the speaker said.TV channels yesterday also broadcast news that the Prime Minister has agreed to form a judicial commission to probe the alleged rigging in the last elections. He also agree to reactive the parliamentary committee made for this purpose earlier.The channels also reported that Pervaiz Elahi would also hold another meeting with the JUI-F chief on Thursday night to discuss the fresh proposals but that meeting did not happen.