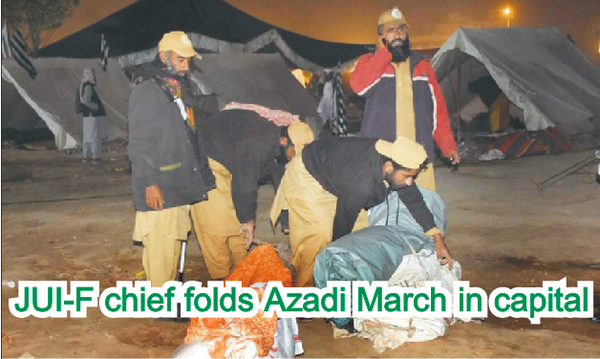 ISLAMABAD - JUI-F chief Maulana Fazlur Rehman on Wednesday called off the anti-government Azadi March in the federal capital and asked the workers to block all major highways, exit and entry points across the country as part of Plan-B. The decision regarding expansion of demonstrations and blockade of main highways and arteries was taken in a three-day long deliberation of JUI-F’s top leadership. Addressing marchers during his farewell speech here, Fazl urged workers to go back to their homes and block all main roads and highways outside the villages. He added “I call on everyone from Karachi to Gilgit-Baltistan to come out on the roads and protest against this government.” He said no demand less than resignation of the PM and re-elections was acceptable. He questioned why the economies of other nations across South Asia were booming and Pakistan’s economy was deteriorating day by day. He further asked his workers not to stop any ambulance or any vehicle on its way in emergency as they were supposed to be peaceful and cooperative with rest of the people. He said they had created history by holding peaceful march and a sit-in of almost 13 days.

Fazl, in his speech, urged the state institutions to support and respect his party’s protest against the incumbent government. Lashing out at the government, he said former prime minister Nawaz Sharif was being politically victimised by the incumbent government. He said government was creating hurdles in Nawaz Sharif’s travelling abroad. He further stated that many government quarters were of the view that end of sit-in in Islamabad will make things easy for them. But, he maintained, it was their wrong perception as they were going to take this protest to streets which will create a lot of hardships for them. He claimed that protest, within the ambit of constitution, was their basic right and they will keep protesting until achieving their ultimate goals. On Tuesday, while announcing his Plan-B, Maulana had announced keeping symbolic presence at the current sit-in location, but yesterday he asked his workers to abandon the area and move to their native places so that they could help their party men involved in road blockades across the country.

Meanwhile, JUI-F leader Attaur Rehman, addressing participants of the sit-in, said the party’s Plan-B had swung into action. “We have started a protest on the Quetta-Chaman Highway,” he said, adding the protesters will also block Chakdara Chowk in Lower Dir and Indus Highway according to the plan. He said Shahrah-e-Resham was blocked as well by the Azadi marchers. “We will close Indus Highway at the Link Road whereas in Punjab, we have already blocked the GT Road,” he added. Rehman further said that party workers will start implementation on Plan-B from Thursday at 2:00 PM. JUI-F leader Rashid Soomro urged protesters to gather at Hub River Road on Thursday at 2:00 pm. “Workers should not carry sticks to the sit-in protests,” he said, adding that ambulances must be allowed to pass through. He said it was a wrong perception of some quarters that Azadi March was ended. He claimed that protest was heading towards success with every passing day. The JUI-F has called upon its workers not to stop ambulances, school vans, cars shifting the sick to hospitals and passengers who want to go to airports to travel overseas.

On the other hand, according to Plan-B, the main roads and highways across the country are to be closed. Punjab-Sindh Highway will be closed at 2:00 pm at Kot Sabzal, Rahim Yar Khan. Indus Highway will be closed at Dera Ghazi Khan. Sit-in protests to be held at two exit points of Islamabad in Rawalpindi. In Khyber Pakhtunkhwa, Azadi marchers will block Indus Highway at 2:00 pm as well as the Peshawar-Lahore Highway. At Chakdara, the protesters will attempt to close routes leading to Swat, Dir, Chitral and Bajaur. Protesters will also attempt to block Karakorum Highway. In Sindh, Maulana Attaur Rehman has called on the JUI-F workers to gather at Hub River Road and block it, cutting off Karachi’s link to Balochistan and vice versa.Azadi marchers will stage a sit-in protest in Larkana and Jacobabad districts to seal off the road connecting Sindh and Balochistan.

Protesters will cut off the routes between Sindh and Punjab by staging protests at Sukkur, Pano Aqil, Shikarpur and Ghotki. Sukkur-Multan Motorway will be blocked by protesters in Sukkur. In Balochistan, protesters will attempt to block Quetta-Chaman Highway at 2:00 pm on Thursday. Protesters will also close the Iran-Taftan road. Balochistan-Karachi Highway to be closed at Khuzdar by protesters. Punjab-Balochistan Highway to be closed at Dera Ghazi Khan boundary. Earlier, protesters of JUI-F blocked Quetta-Chaman Highway as part of the party’s ‘Plan-B’. The highway was blocked for vehicular traffic creating hardships for commuters, who now remain stranded for many hours. According to sources, hundreds of vehicles were stuck as the protesters closed the road which is used for Pak-Afghan Transit Trade and NATO supplies and the authorities were holding talks with protesters to convince them to end the highway blockade. All main roads of Islamabad and Rawalpindi would be closed by the marchers. Thousands of people, including seminary students, are participating in the march. In addition, convoys of political parties, including the Pakistan People’s Party (PPP), the Pakistan Muslim League-Nawaz (PML-N), the Awami National Party (ANP) and others, joined the march.