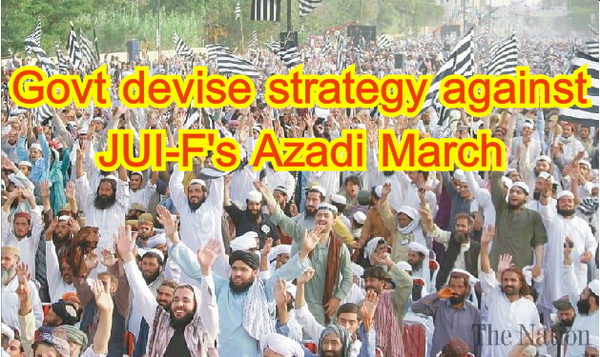 The federal government has devised its strategy against Jamiat Ulema-e-Islam-Fazl’s (JUI-F) Azadi March and decided that use of force will be the last option if the protest creates anarchy. It has been decided that strict action will be taken against the marchers if they enter Islamabad’s Red Zone. Prime Minister Imran Khan has given complete authority to the government’s negotiation committee – headed by Defence Minister Pervez Khattak – to take decisions. Furthermore, the Pakistan Tehreek-e-Insaf-led government has decided to hold talks with the protesters if they stage a sit-in in the federal capital. The anti-government Azadi March caravan led by JUI-F Chief Maulana Fazlur Rehman reached Lahore in the wee hours of Wednesday.

A large number of workers and leaders of various opposition political parties, including Pakistan Muslim League-Nawaz (PML-N) and Pakistan Peoples Party (PPP) welcomed Fazlur Rehman and the participants on reaching Lahore. The long march of opposition parties including, JUI-F, PPP, PML-N, Awami National Party (ANP) and others started its journey from Karachi on October 27 and will enter Islamabad on October 31 (tomorrow) during daytime where the JUI-F chief has announced to decide the next course of action.

On the other hand, all private schools will remain close in Islamabad tomorrow citing uncertain security, law and order situation when the opposition parties’ Azadi March will enter the federal capital. Private Schools Association’s president stated that the decision to reopen the schools will be taken in light of the developing situation. The secretary of the association said that the decision has been taken for the safety of schoolchildren.