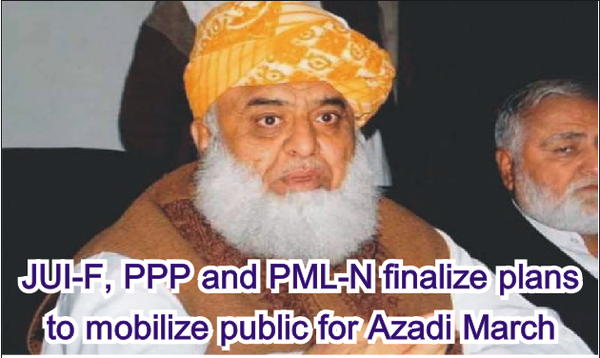 Maulana said that PML-N has assured him that it will stand with him till the step down of Prime Minister Imran Khan. Rallies coming from Lahore, Peshawar and other parts of country will enter on Rawalpindi through Rawat and Attock Pull. He claimed that this is initial plan and could be changed on October 29 or 30 but March will be entered in Islamabad on October 31. He claimed that a much number of people are present in twin cities that can fill the Jinnah Avenue.

He said Punjab police didn’t arrest any worker of their party till yet but pressure is being put upon party leaders through different sources. Former MNA Malik Shakeel Awan has said that party has planned to welcome Azadi March in Islamabad and Rawalpindi and four teams have been made for the protection of party workers while PPP Rawalpindi secretary general Chaudhry Iftikhar said that PPP is ready to participate in the Azadi March and will start campaign to mobilize people soon.