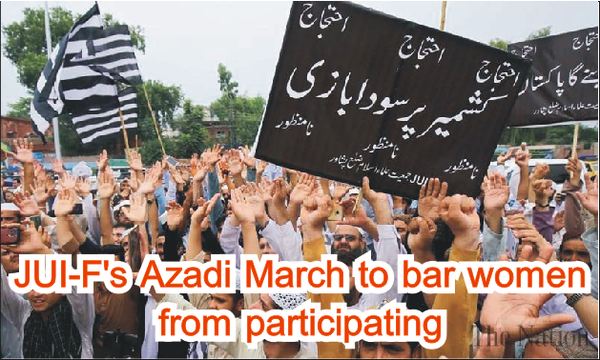 The Jamiat Ulema-i-Islam Fazl (JUI-F) has decided not to invite women to its Oct 27 anti-government march towards Islamabad. Sources said JUI-F chief Maulana Fazlur Rehman wrote to the Pakistan Muslim League-Nawaz (PML-N) informing it about the decision of non-participation of women in the upcoming Islamabad sit-in. The JUI-F chief had a day earlier said his Azadi march would only end when the government falls. “The entire country will be our battleground,” he told reporters at a press conference.

Our strategy will not remain stagnant. We will keep changing it to cope with [any] situation,” he said. He insisted that a “flood of people from all over the country” was coming to join the march. When asked whether he has been able to garner the support of other opposition parties, he said that he “hope(s) to see them” in the march. He added that since all opposition parties agreed that last year’s general elections were “fake” and that reelection should be held, they should all be “on the same page and same stage”.