The vision of Z A Bhutto 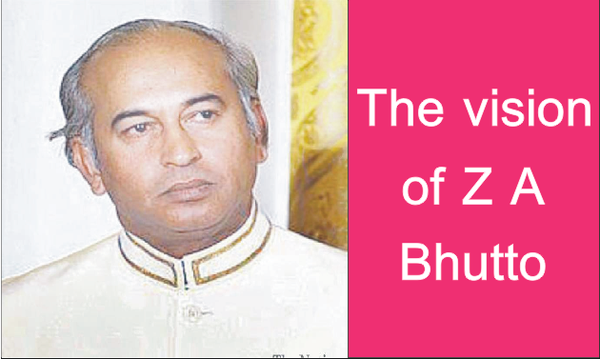 This day of April 4 reminds us of the judicial murder of a great charismatic public leader Shaheed Zulfiqar Ali Bhutto in 1979 – a day that was actually the death of humanity. He ruled the hearts of the people as he gave a voice to poor masses.

History will neither forgive nor forget the murder of a leader who wanted to make us progressive and peaceful, to take us towards national integrity and prosperity by empowering the masses, and by making Pakistan the first Muslim nuclear power in the world. He feared that Pakistan would be exposed to external danger by neighbouring India and therefore announced, “We (Pakistan) will eat grass, even go hungry, but we will get one of our own (nuclear bomb), we have no other choice.”

Bhutto refused to succumb to international pressure to roll back Pakistan’s nuclear programme. Gerald Feuerstein, who was a witness to the meeting between Prime Minister Shaheed Zulfiqar Ali Bhutto and US Secretary of State Henry Kissinger in Lahore in August 1976, admitted in an interview that Bhutto rejected the warning to roll back or compromise Pakistan’s nuclear programme.

Shaheed Zulfiqar Ali Bhutto was a distinguished leader in the history of Pakistan who imparted the lesson of peace and humanity to the rest of the world Shaheed Zulfiqar Ali Bhutto hurt for his people, country and the Muslim Ummah, and he made history by bringing the Ummah on one platform during the Islamic Summit Conference in Lahore in 1974. He was not only a distinguished national leader but also an unparalleled statesman who revived a broken nation after the disaster of the fall of Dhaka by bringing back 90,000 prisoners of war. The public must know that the enemies of Pakistan decided to eliminate him after he refused the rollback of the nuclear programme despite numerous pressures and threats of making him a “horrible example”.

CIA hatched a plan to block communism, using Islam through General Zia-ul-Haq. He preached his own brand of Islam wherein he promoted extremists, terrorists and all kind of criminals under the name of Jehadis. These extremists and criminal elements were brought and nourished by US in Pakistan for launching them in Afghanistan to operate.

I got an invitation for an official function at the Army House once, but it was this black day in the history of Pakistan, as on this day, the Chief Justice of Pakistan upheld the death sentence of Bhutto. He received many greetings and commendations for his judgment. General Zia-ul-Haq, standing next to the Chief Justice was also receiving greetings from his own created politicians and senior colleagues. They were essentially celebrating the death of a charismatic leader who dreamt of Pakistan leading the world.

They killed and buried Bhutto mysteriously but hid his brave daughter. Shaheed Mohtarma Benazir Bhutto, the first woman Prime Minister of the Muslim world, signified the political rebirth of her father Zulfiqar Ali Bhutto’s legacy. She suffered the most in the hands of Zia-ul-Haq and his remnants but eventually she witnessed the crashing of C-130B Hercules aircraft where even remains of the body of Zia-ul-Haq could not be found. The wrath of Allah Almighty also fell on Justice Moulvi Mushtaq who had awarded death sentence to Shaheed Zulfiqar Ali Bhutto as well.

As Director FIA, I took it upon myself to look into old files of the judicial murder of Shaheed Zulfiqar Ali Bhutto, where I found some tampered documents. I will soon write a book detailing the conspiracy behind Shaheed Zulfiqar Ali Bhutto’s ‘judicial murder’, which was carried out through a premeditated plan. General Zia-ul-Haq’s government changed the documents but the entire world declared it a ‘judicial murder’. I appreciate the honesty of the then Director Law of FIA who had clearly stated the shells of the bullets were replaced, witnesses were tampered, and Masood Mahmood was tutored under duress.

General Zia-ul-Haq tried to eliminate Bhuttoism by killing Zulfiqar Ali Bhutto but he still rules the hearts of the people while Zia-ul-Haq was seen as a disgrace in the world. We know almost all those Muslim leaders who participated in the Second Islamic Summit Conference held from February 22-24, 1974 in Lahore died unnatural deaths. Undoubtedly, the killing of all these Muslim leaders cannot be a coincidence but an operation to punish them and to give a message to the Muslim world.

In my humble capacity, I will soon expose those facts which are buried in files from those who are mum. Us PPP workers and President Asif Ali Zardari, filed a reference to Supreme Court but the then Chief Justice Iftikhar Muhammad Chaudhry did not take it up. I, therefore, appeal to the present Chief Justice to take up this case to vindicate the position of Shaheed Zulfiqar Ali Bhutto.

Shaheed Zulfiqar Ali Bhutto was a distinguished leader in the history of Pakistan who imparted the lesson of peace and humanity to the rest of the world. He gave voice to the poor and oppressed people of Pakistan and empowered them to stand for their rights. I had the honour to work with three Bhuttos, first with Shaheed Zulfiqar Ali Bhutto, and thereafter Shaheed Mohtarma Benazir Bhutto – my leader, mentor and sister – followed by Asif Ali Zardari and Bilawal Bhutto Zardari – the only hope for Pakistan’s future. I feel proud to have personal and political association with the Bhutto and Zardari families. Like Shaheed Mohtarma Benazir Bhutto who carried on Bhutto’s legacy more powerfully and bravely, I find the same bravery, wisdom, vision and far-sightedness in Bilawal Bhutto Zardari.

Bhutto’s ideology was popular throughout the world and he could have saved his life if had compromised with a dictator, which was an impossible notion for a leader of the people. Today, Pakistan is secure only due to Bhutto’s vision. The future belongs to PPP leader Bilawal Bhutto Zardari, as he is the only one who truly has the guts to fill Zulfiqar Ali Bhutto’s boots. Bilawal is the future Prime Minister of Pakistan InshaAllah, and the people can see a Bhutto among themselves once again.

Pakistanis see a ray of hope in Chairman Bilawal Bhutto to pull the nation out of crisis. He is rightly following in the footprints of Z A Bhutto and SMBB and we will soon witness him be successful in his mission. The writer is a PPP Senator, former Interior Minister of Pakistan, and Chairman of think tank “Global Eye” and Senate Body on Interior and Narcotics.