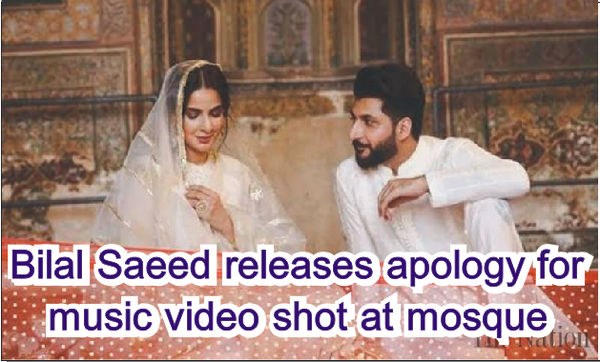 Singer Bilal Saeed stepped forward on the ongoing Qubool Hai controversy and released a new apology video for each Muslim whose feelings have been hurt by seeing them shoot the song video at the mosque. The Baari singer clarified in the video that he also belongs to a Muslim family and that he can never do anything against Islam. “I swear upon Almighty Allah that we (Saba and him) did not play any song in the mosque neither did we dance,” said Bilal.

He further adds, “We are humans just like you all. We did not perform any dance steps in the mosque. But yes, we do agree we had committed a mistake unintentionally. I know, your emotions have also been hurt by the clip, but we did not do anything intentionally.” “As every Muslim’s emotions have been hurt, I have decided to edit out the Wazir Khan Mosque’s scene from the video,” he said. He concluded by apologizing again and expressed his guilt by asking forgiveness from everyone.