Bilawal alleged opposition not takes into confidence on legislation 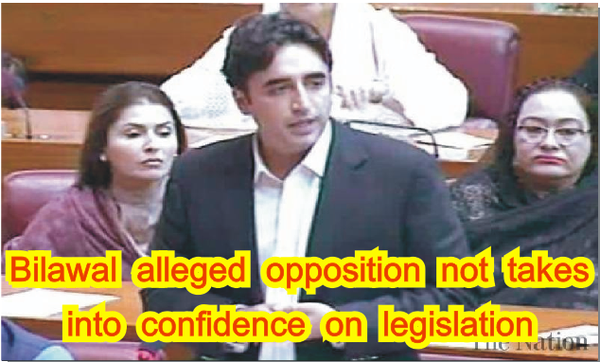 Pakistan People’s Party (PPP) Chairman Bilawal Bhutto Zardari has said that an attempt was made to gain dictatorial powers in the name of Financial Action Task Force (FATF). The opposition was not taken into confidence on the legislation, the government has to play a responsible role on the FATF legislation. Addressing a press conference in Islamabad, Bilawal Bhutto said that the Senate and the National Assembly were not taken into confidence on the legislation. The government is fooling the people and the opposition cannot be silenced. Bilawal Bhutto said that government advisers should be probed for assets beyond income but Imran Khan is still protecting their corruption.

The National Accountability Bureau (NAB) should also file a case against Shahzad Akbar for assets in excess of income. He has not declared his property abroad for the last two years. He demanded that all special assistants to the prime minister disclose their assets. He said that no law could be passed for Kulbhushan Jadhav through the back door.

They say that they are obeying the word of the International Court of Justice, those who were supposed to be the ambassador of Kashmir, are protecting Kulbhushan. The PPP chairman said that the FATF and NAB laws were being linked with the NRO. The government can make a Pakistani a missing person for six months in the name of FATF, we cannot allow that. Bilawal said that the FATF bill became controversial because of the government’s authoritarian nature and ego. He said that the attitude of the government would increase the problems of the people.