No other way but to protest against this govt: Bilawal 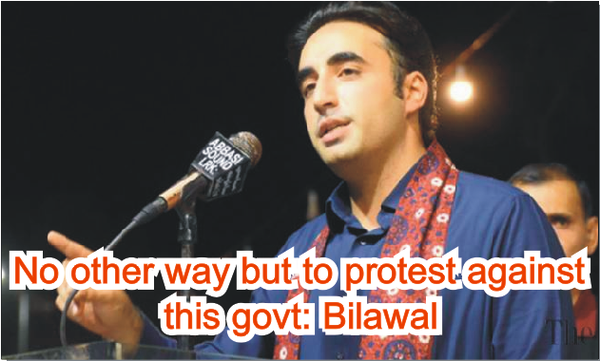 Chairman Pakistan People’s Party (PPP) Bilawal Bhutto Zardari said opposition has no other way but to protest against this government. He said it was his duty to represent people of Pakistan and stop those who are damaging the country due to their incompetency. Addressing a rally at Kandhkot, he said PPP will not compromise on rights of public. He said Asif Zardari is bearing the oppression but never bowed down before the government.

Bilawal said his father has been put in jail without any crime and he is deprived of medical care. Bilawal Bhutto-Zardari said that his party will reveal the true face of Prime Minister Imran Khan before the public. He said that it was not the ‘Naya Pakistan’ as promised by the prime minister before elections. Discussing the pre-election time, Bilawal said that Imran Khan made tall claims but failed badly to deliver on them. He said that inflation was at an all-time-high and people had been rendered jobless in the country. “Is this the new Pakistan? The old Pakistan was much better than this,” he said. The PPP chairman also chanted the slogans of ‘Go selected’ with the crowd.

He said no one convicted even after some people were killed in broad day light in Sahiwal. He said the entire country is saying that this incompetent prime minister has to go home now. He said the situation will become uncontrollable if government did not take measures now. He said government did not fulfill any of its promises made during election campaign. He said economic stability of the country has been compromised and heavy taxes were imposed after due planning. Bilawal said that people had been rendered jobless in the country and the economy was on the brink of collapse. He said that inflation was at an all-time high in the country.