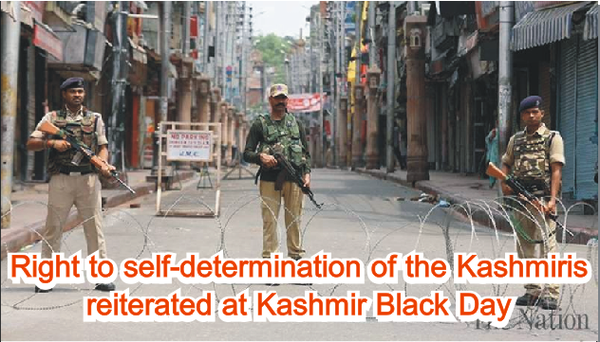 An event to mark the Kashmir Black Day.on 27 October was held in Ankara on Saturday . Organized by the Anadolu Youth Association..Speaking on the occasion, Ambassador of Pakistan, Syrus Sajjad Qazi, said that millions of Kashmiris across the globe were marking Black Day. on 27 October. On that day in 1947, the overwhelmingly Muslim majority state of Jammu & Kashmir was forcibly occupied by India, against the wishes and aspiration of the Kashmiris. This illegal aggression, he added, resulted not only in one of the worst human rights situations of recent times in the Indian Occupied Jammu & Kashmir but also gave birth to a protracted dispute that continued to threaten regional and international peace and security.

Ambassador Qazi underlined that India continued to blatantly violate the relevant UN Security Council resolutions on Jammu & Kashmir that guaranteed the Kashmiris their inalienable right to self-determination. He added that India’s illegal and unilateral steps of 5 August 2019, yet again, were in direct contravention of these resolutions, and were hence condemnable in the strongest possible terms. He also expressed deep concern at the prevailing human rights and humanitarian situation in the Indian Occupied Jammu & Kashmir, as well as at the rising tide of right-wing Hindu extremism and Islamophobia in India, that continued to target Muslims in general and Kashmiris in particular.

Ambassador Qazi expressed deep gratitude for the people and the government of Turkey for their consistent, principled and just support for the resolution of the Jammu & Kashmir dispute. He also thanked the members of the Anadolu Youth Association for highlighting the issue as well as for raising their voice in support of the oppressed Kashmiris. He emphasized that the international community too must fulfil its moral responsibility by ending the ongoing Indian atrocities in Occupied Jammu and Kashmir, and by allowing Kashmiris their right to self-determination.