'Black Day' being observed against India's illegal occupation of Kashmir 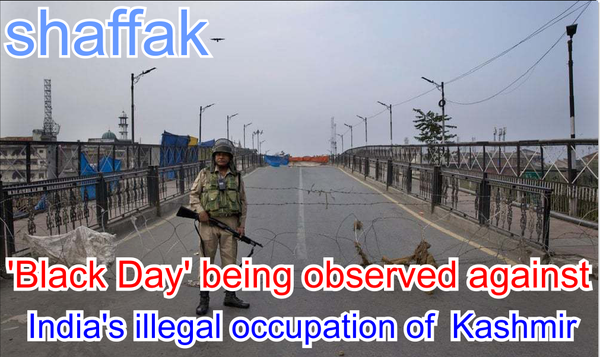 Pakistanis around the world and Kashmiris on both sides of the Line of Control (LoC) are observing "Black Day" on Sunday to convey their rejection of India's illegal occupation of Kashmir on October 27, 1947.

A complete shutdown is being observed in occupied Kashmir, said Radio Pakistan.

Frustration, anger and fear have been growing in the region since August 5, when the Indian government stripped occupied Kashmir of its semi-autonomous status and imposed a curfew and a communications blackout. With a brief restoration in some call and text services for mobile phone services, the clampdown has now continued for over 80 days.

He said that on Oct 27, 1947, India had illegally occupied Jammu and Kashmir and on Aug 5 of this year, "it took further steps to unilaterally alter the disputed status of the territory and change its demographic structure and identity".

He said that through the deployment of additional troops and the "unprecedented media and communications blackout", occupied Kashmir had been turned into the "largest prison on the planet".

Prime Minister Imran said that Pakistan demands the "immediate lifting of the curfew and communications blackout as well as rescinding of India's illegal and unilateral actions in the occupied territory".

Foreign Minister Shah Mahmood Qurershi assured Kashmiris "that not only do we commemorate their exemplary grit and spirit on the occasion of Kashmir Black Day" but also "reiterate our firm and continued political, moral and diplomatic support to the people of IOJ&K in their grand struggle until they achieve their legitimate right of self-determination as per the United Nations Security Council resolutions".

"India should realise it cannot fool the world forever and that its tried and trite accusations of terrorism, while simultaneously being the principle perpetrator of it, have little import with the international community," said Qureshi in his message.

To express solidarity with Kashmiris on Black Day, various programmes have been planned across Pakistan, Radio Pakistan reported, adding that Pakistani missions abroad have been instructed to organise events with the Pakistani diaspora, local parliamentarians, think-tanks and others in order to highlight the significance of the day.

In Azad Jammu and Kashmir (AJK), the Kashmir Liberation Cell, Hurriyet and religious organisations will organise rallies, demonstrations and protests. According to Radio Pakistan, AJK Prime Minister Raja Farooq Haider will preside over the main event in Muzaffarabad, where a rally will also be taken out.

The Punjab government is marking Black Day in collaboration with the federal government. Chairing a meeting of Kashmir Committee Punjab, law minister and committee chairman Basharat Raja said the longest and worst curfew in occupied Kashmir is extremely deplorable.

The PML-N will also hold rallies across Pakistan to express solidarity with Kashmiris.