After protests against 'blackmail', University of Balochistan to impose uniforms 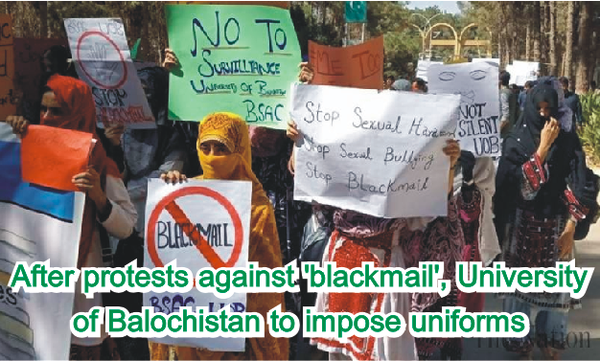 Through a notification circulating on Twitter, it appears that the University of Balochistan will be making uniforms mandatory for students starting March 1, 2020. The notification, circulated by the Undergraduate Studies Office states: "Strict compliance to all students (boys/girls) admitted in BS/Masters Study Programmes, the wearing of student's uniform, available at Mother Care, Jinnah Road, Quetta, shall be mandatory." Adding that: "After March 1, 2020 no student (boy/girl) will be allowed to enter into the university premises without wearing the prescribed uniform and will be entertained for any reason," the statement added.

As Quetta is a conservative city, authorities are trying to evaluate whether the university administration was putting the lives of these students at stake by threatening to inform parents.  This case came at a time many Pakistani universities experienced a wave of protests against the policing of opposite-sex interaction. It seems the University of Balochistan is still, in applying a uniform that it believes will maintain inter-gender decorum, applying the belief that male and female students - and all casual interactions between them - must be strictly controlled and scrutinized.

"Universities should be spaces of learning, not surveillance. Students should be treated with respect, not as criminals to be controlled and contained," Dr Nida Kirmani, a professor of sociology at the Lahore University of Management Sciences tweeted. If the policy of uniforms is applied, the University of Balochistan may become one of the country's only co-educational government institutes that imposes specific uniforms on male and female students. A senate committee has already been formed to address the crisis, and to investigate the extent to which members of the university administration are culpable in charges of harassment and blackmail.