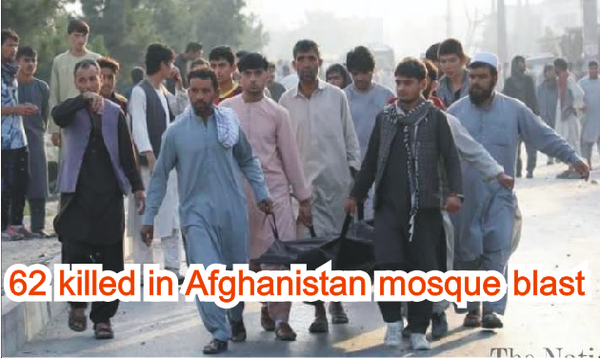 At least 62 people were killed and nearly 60 others were wounded in two blasts inside a mosque in Nangarhar province during Friday prayers, confirmed Attaullah Khogyani, spokesman for the Nangarhar governor. The mosque is in the Jaw Dara area of the Haska Meyna district of Nangarhar. The incident took place at approximately 01:30 pm, Khogyani said. According to officials, explosives were placed inside the mosque and detonated when the worshipers were busy in prayer. Many wounded people are not in a stable condition, Khogyani said. Sediq Sediqqi, President Ghani’s spokesman, in a tweet strongly condemned today’s blasts and called out the Taliban for continuing to target civilians.

The Governor’s Office of Nangarhar in a statement said roof of the mosque collapsed following the explosion which left dozens of prayer participants dead or wounded. Malik Mohammadi Gul Shinwari, a tribal elder from the area, said that the mosque had completely collapsed. “It was a heartbreaking scene I witnessed with my eyes,” Shinwari said, adding that 32 bodies and scores of injured have been transported from the blast site. No individual or group has so far claimed responsibility for the explosion. The Taliban has denied responsibility for the blasts.