At least 5 killed, 14 injured in blast on Chaman's Mall Road 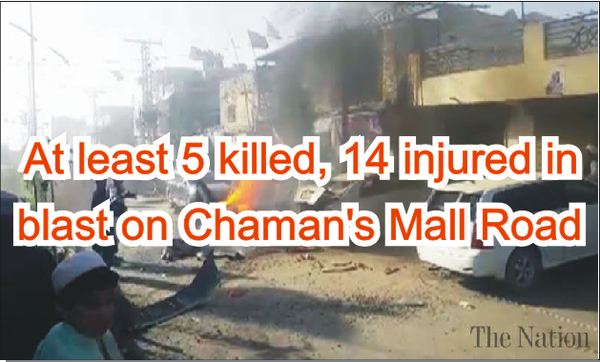 At least five people were killed and several injured in a blast on Chaman's Mall Road on Monday, police said. At least 14 have been injured, all of whom have been taken to the Civil Hospital. According to police inspector Muhammad Mohsin, unidentified miscreants had planted an improvised explosive device in a motorbike that was parked on the roadside. Window panes of several shops and houses in the vicinity were shattered due to the impact of the explosion.

Chaman is considered a sensitive town in Balochistan as it shares a border with Afghanistan's volatile Kandahar province. In March this year, at least nine people were injured in an explosion near the Levies Lines of the town. The attack targetted Levies Risaldar Maj Naseebullah, who remained safe. Balochistan has recently seen an increase in terrorist attacks.