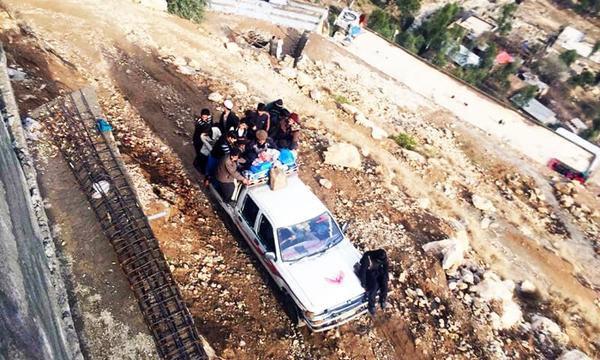 Search operation for at least 15 missing bodies restarted on Saturday morning after a pickup truck carrying 26 people plunged into the Kandia river in Kohistan last night.

The incident took place in a very difficult and remote terrain yesterday, when a pick up carrying 31 passengers fell into the river after a wooden bridge collapsed while the car was on it. Five of the passengers jumped out of the vehicle and managed to save their lives.

At the moment, the flow of water in the river is fast due to which search teams are facing difficulties. However, Deputy Commissioner Upper Kohistan Hamid Ur Rehman told Dawn that expert teams have been dispatched to fish out the bodies from the river.

According to the DC Rehman more teams are being dispatched to the site as 15 bodies are still missing.

“The bridge was in a poor state and could not sustain the load of 31 passengers," the DC, added.

According to Ubaidur Rehman, general secretary of Civil Defence, the victims, which include women and children, belonged to two different families

He said, police, civil defence volunteers, local people and divers are taking part in the search operation for the bodies.

“We fear that children's bodies may have moved downward towards the Indus. Lack of resources and facilities are hampering the rescue work,” he said.

Meanwhile, Chief Minister Khyber Pakhtunkhwa Mahmood Khan expressed his sorrow for the victim's families and directed the deputy commissioner to expedite the search operation and use all available resources to find the bodies and also cooperate with the affected families.

Kandia is located in Upper Kohistan, which has been badly affected by frequent flash floods, making its roads extremely dangerous for travel.

About 70 suspension wooden bridges are being used for crossing the Kandia river and other streams but most of the bridges are in dilapidated condition.