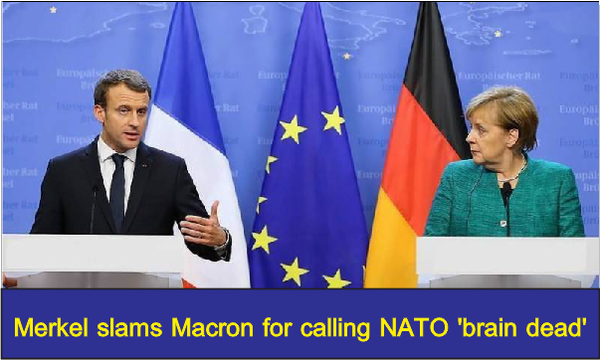 German Chancellor Angela Merkel criticized French President Emmanuel Macron on Thursday for calling NATO "brain dead", saying the Western military alliance was "indispensable" for European security.Speaking at a joint press briefing with NATO Secretary General Jens Stoltenberg in German capital Berlin, Merkel said: "This point view is not mine. Such a lashing out is not necessary."Pointing to what she described as Macron's "drastic words", Merkel said the transatlantic military pact was "indispensable" for European security.

Stoltenberg "agreed" with Merkel's statements saying any attempt to distance Europe from the U.S. was also endangering European Union security. He called for stepped up cooperation within NATO in a bid to strengthen the Western military alliance.Macron told the Economist weekly that NATO "only works if the guarantor of last resort functions as such. I'd argue that we should reassess the reality of what NATO is in the light of the commitment of the United States."He added that the U.S. "shows signs of turning its back on us." The French president, who has been a staunch supporter of the European Union, said U.S. President Donald Trump "doesn't share our idea of the European project."