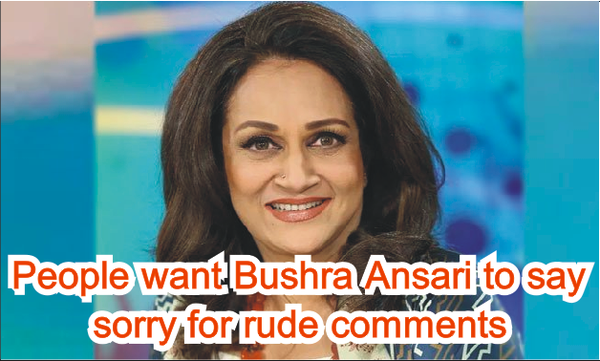 Islamabad-Amma TV Aur Main is an online show by the founders of Galaxy Lollywood and they are famous for their drama reviews. Momin Ali Munshi and his mother Lubna Faryad reviews different dramas and they praise and criticize the work of actors. Recently, she reviewed about acting of Zara Noor Abbas and Asma Abbas in drama serial Zebaish. She made fun of their poor acting in the latest review. However, Bushra Ansari didn’t like the review and she posted a harsh comment on the review.

Bushra Ansari wrote, “What a pathetic time for our dramas.. cheap low class person can just comment rubbish stuff about the hard work and creative efforts of artists. What criteria they have about this field? I don’t get it. Why people are watching such a shallow paindoo style of them… it’s a sin to destroy people s integrity.” After posting this comment, Bushra Ansari deleted her comment but her comment spread like fire. Galaxy Lollywood took notice of this and commented on this matter. They wrote: “Bushra Ansari recently posted and deleted a very harsh judgment of our beloved Amma and her drama reviews.

We’d like to formally address the points she’s raised instead of engaging in petty name-calling. Amma is not and has never claimed to be a critic. She is simply a house wife who enjoys watching dramas and thus, representative of majority of our drama viewers.” #IStandWithAmma is trending on social media and people want Bushra Ansari to say sorry.