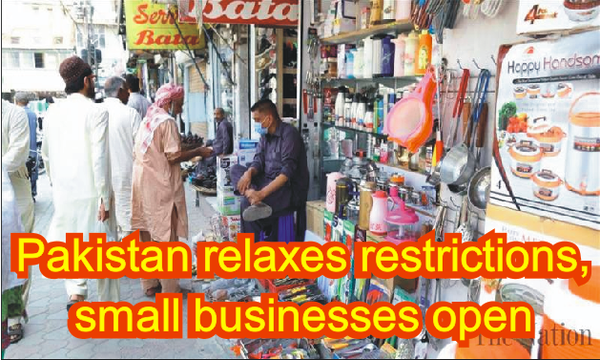 Pakistan on Monday further relaxed coronavirus restriction to open small markets and shops across the country despite a sharp rise in cases. According to officials, all the small markets, shops, and allied industries of the construction sector opened today under a federal government announcement last week.

"As per the government decision, all shops and small markets will open from morning to evening for four days a week," Ajmal Khan Wazir, spokesman of the Khyber Pakhtunkhwa government, told Anadolu Agency.

Wazir requested the public to follow standard procedures to prevent the virus’ spread. On Thursday, Prime Minister Imran Khan announced a gradual exit from the nationwide lockdown despite a surging number of coronavirus cases in the country. Khan said the lockdown has badly hurt laborers, small businessmen, and the general public.

"Our tax revenues dropped 35% while exports also fell due to the lockdown," he said. However, the government extended the closure of education institutions across the country until July 15.

In March, Pakistan imposed a nationwide lockdown, closing shops, markets, shopping centers, and offices except for emergency services, in a desperate move to curb surging COVID-19 cases. Last month, Khan announced the reopening of "low-risk" industries, including construction, agriculture, e-commerce, paper and packaging, to stem a deepening economic meltdown caused by the virus.

The government also allowed congregational prayer in mosques for the Muslim holy month of Ramadan. The number of novel coronavirus cases in Pakistan, the second worst-hit country in the region after India, has risen to 30,931 after 1,476 new cases were reported in last 24 hours, according to the Health Ministry.

The death toll in the country also climbed to 667 after 28 people lost their lives in the last 24 hours. So far 8,212 people have recovered and been discharged from the hospitals. Globally, there have been over 4.1 million cases of the virus, along with nearly 283,000 deaths and over 1.4 million recoveries, according to data compiled by the US’ Johns Hopkins University.