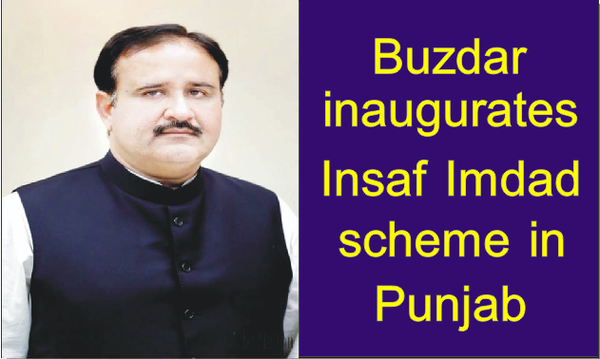 LAHORE - Punjab Chief Minister Sardar Usman Buzdar, on Monday, inaugurated the Insaf Imdad Program during his visit to Nankana Sahib district, where he also inspected the aid distribution in Government MC Girls School. Talking to the aid-recipients, who expressed their satisfaction over the arrangements, the chief minister told them that Rs12,000 each would be given to 2.5 million needy families. Usman Buzdar said that no one could challenge the immaculate transparency of this program solely meant for the needy families. “The Punjab government will not leave the impoverished families affected due to the lockdown, alone”, he reiterated.

He maintained that government was selflessly serving the people, while rising above petty politics. “Those busy in politicizing the coronavirus pandemic have disappointed the people”, he remarked. The CM also inspected the 100-beds corona field hospital set up in a gymnasium. He told that field hospitals had also been set up in Sangla Hill and Shah Kot, each having 30-beds capacity. “Four ventilators are also provided and anti-coronavirus activities are being directly supervised by me”, the CM added. He also appreciated the work done by DC Nankana Sahib and his team to counter the onslaught of coronavirus and directed them to work with more zeal.

The CM said that reopening of specific businesses and shops had been allowed from Monday, but they would have to follow government devised SOPs. Legal action would be initiated in case of SOPs' violation, he warned. The CM expressed displeasure over the dilapidated conditions of roads during his inspection of the city and directed to complete the remaining construction work of Syedwala Road within 15 days adding that no leniency would be tolerated because timely completion of development projects was essential.Provincial Ministers Mian Khalid Mehmood, Asad Khokhar, Taimoor Bhatti, assembly members, PTI's general secretary and district president, SMBR, ACS (Urbanization), Commissioner Lahore and RPO Sheikhupura were also present on this occasion.