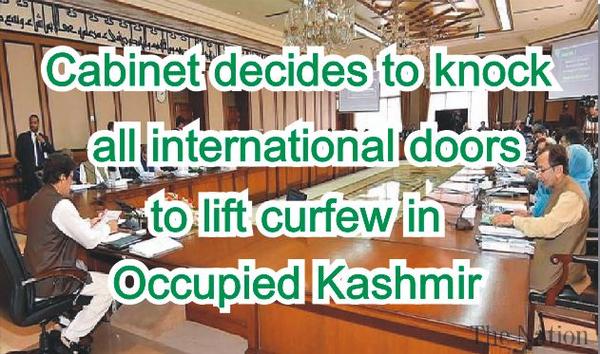 Federal Cabinet on Tuesday unanimously decided to knock all international doors to lift the curfew imposed by Indian government in Occupied Jammu and Kashmir. This was stated by Special Assistant to Prime Minister on Information and Broadcasting Dr Firdous Ashiq Awan while briefing newsmen about Cabinet decisions in Islamabad on Tuesday. She said the Prime Minister took the cabinet into confidence regarding measures being taken by the government to internationalize the Kashmir issue and to expose the atrocities on innocent Kashmiris. The Prime Minister apprised the cabinet of fascist, extremist mindset of the Modi government which was condemned by the cabinet members. She said due to effective diplomacy of the Pakistan, effective voices at OIC and European Union have emerged.

Dr Firdous Ashiq Awan reiterated government's commitment that it will stand by Kashmiris. Referring to other issues that came up during the cabinet meeting, Dr. Firdous Ashiq Awan said Prime Minister directed to bring hospital waste management policy in next cabinet meeting after holding thorough consultation with the provinces. The Prime Minister expressed displeasure over the dumping of waste by government and private hospitals. Imran Khan said all government hospitals in the federal capital brief the cabinet about the measures taken by them. She said Ministry of Information and Broadcasting has put forth the suggestion to cabinet to set up learning centers in big cities for the facilitation of journalists as well as general public.

The youth and common people can avail the internet facility as well as information. The cabinet was briefed in detail about the steps being taken for Madrassa reforms and to make the curriculum uniform across various educational institutions in the country. The curricula will be streamlined under a unified policy and the Minister of Education will give details to the media in this regard. Dr Firdous Ashiq Awan said the cabinet deferred the issue of the regularization of services of contract and daily wage employees working under various ministries.

She said a high powered committee will collect data from each ministry to make the process transparent for regularizing of services. She said cabinet deferred the discussion on the real estate regulatory authority due to senate in session.  This issue will be discussed in next cabinet meeting in order to streamline various housing developments in the country. Dr Firdous Ashiq Awan said the cabinet decided to waive off visa condition for Malta for holders of diplomatic and official passports.