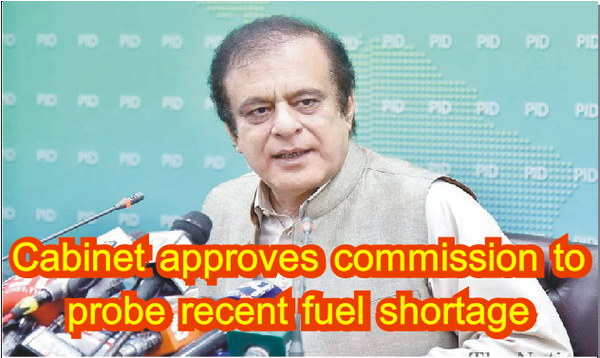 ISLAMABAD  - Minister for Information and Broadcasting Shibli Faraz has said that there is no issue of demand and supply gap relating to sugar and wheat in the country as there is a sufficient stock of wheat and sugar available in the country, however, the government has directed private and public sectors to import 1.5 million tons of wheat as precautionary measure to face any situation.

While briefing the media after the federal cabinet meeting here on Tuesday, the minister said that the federal government is taking every available step for Karachi as people of the port city could not be left at the mercy of the PPP-led Sindh government.

The minister said that the prevailing rain spell in Karachi has exposed tall claims of the Sindh government about Karachi. Sewarage system in Karachi has failed altogether and seeing miseries of people in the wake of rains in Karachi, it seems that there is nothing in the name of governance and management there, he added. The Pakistan People’s Party did nothing for Sindh especially Karachi and the people witnessed bad governance of the Sindh government, said Information Minister Senator Shibli Faraz.

He, however, said the private and public sectors have been directed to import wheat to meet the deficit of 1.5 million tons of wheat. The minister said that the district administration has been directed to take strict action against hoarders of wheat and sugar.

He said that the cabinet had approved constitution of an investigative commission to probe the causes of shortage of petrol last month in the country. He also added that availability of Euro-5 Petrol will be made available by next month.He said that the commission will give recommendations to ensure that such situation does not develop in future. The minister said Prime Minister Imran Khan expressed satisfaction over the encouraging indicators about the Naya Pakistan Housing Scheme.

He also said that a boost to construction sector will have a positive impact on the overall national economy. He said that the matter about payment of outstanding dues of media houses will be resolved immediately after the Eid. He regretted that the Sindh Government has not improved infrastructure in the city and due to the poor sewerage system the rainwater has inundated Karachi.

The minister assured that the federal government will perform its role in the matter to mitigate sufferings of the people of Karachi. About the Covid-19 situation, Shibli Faraz said that the trend of coronavirus cases has considerably declined due to the government’s effective smart lockdown policy. He also said that it is also privilege of the provinces to announce smart lockdown in their respective regions against the coronavirus pandemic.

He, however, warned that carelessness during Eid-ul Azha could possibly raise the coronavirus cases. Therefore, he urged the people to strictly follow SOPs against Covid-19 during the Eid days. The minister also stated that the Prime Minister has fulfilled the role as an ambassador for Kashmir. He added that scores of programs will be on aired regarding Kashmir on 5th August. The government will express condemnation for all sorts of Indian activities in Occupied Kashmir on 5th August from all forums.