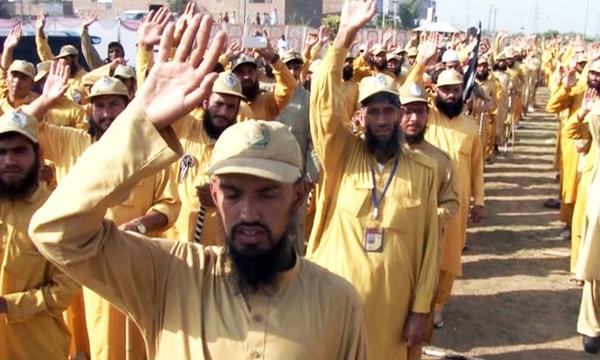 The federal cabinet on Monday approved a summary seeking a ban on the “militant wing” of the Jamiat Ulema-i-Islam-Fazl (JUI-F), sources in the cabinet division said.

According to the sources, the summary, moved by the interior ministry, was approved through circulation just a day ahead of a cabinet meeting. The government took the measure to avoid a discussion on the matter in the cabinet, the sources added.

Under the circulation method, a summary is sent to all cabinet members who sign the copy to give their approval, but the summary is also deemed approved after a stipulated period of time even if some members of the cabinet haven't signed it.

Last week, Special Assistant to the Prime Minister on Information Dr Firdous Ashiq Awan had said that the federal cabinet would take up the matter in its next meeting.

The interior ministry in its summary sent to the cabinet had said: “Various source reports shared by our intelligence agencies and provincial governments with the Ministry of Interior [have] revealed that the JUI-F has established a militant wing, a private militia/Razakar force named ‘Ansar-ul-Islam’ to provide security to marchers for the Azadi March scheduled for October 27, 2019 and proposed sit-in in Islamabad from October 31, 2019.”

According to the summary, a copy of which is available with Dawn, Ansar-ul-Islam is capable of functioning as a military organisation, which is a violation of Article 256 of the Constitution.

The ministry said Ansar-ul-Islam was organised, trained and equipped and it was capable of being used to display physical force in promoting Azadi March and objectives of the JUI-F.

The summary said that the uniformed force, carrying batons and sticks with wrapped barbed wire under a politico-religious party, apparently aims at challenging the writ of the government.

It said the rehearsals and march pasts carried out by the said force during a workers convention recently held in Peshawar, pledging allegiance to the top JUI-F leadership, has stirred fear among the general public and it is being seen as a private armed militia/combating force to confront the law enforcement agencies.

“It is feared that the said private militant force, reportedly around 80,000 all over Pakistan, may sabotage public peace and create disorder and anarchy across the country during the planned Azadi March and other political activities by JUI-F.”

The interior ministry had also expressed concerns that the private militia could be equipped with other objects, including arms and ammunition.

Ansar-ul-Islam posed a real, present and severe threat to the peace and tranquillity of Islamabad and the four provinces, it added.

The summary had also given the reference of the National Action Plan that prohibits militant outfits and armed gangs from operating in the country.

The ministry had referred to Article 146(1) of the Constitution which allows the federal government to delegate any of its powers to the provinces, conditionally or unconditionally, with the consent of the provincial governments.

It had asked the federal cabinet to authorise it to seek consent from the provinces so that the process of abolishing/banning Ansar-ul-Islam could be initiated.