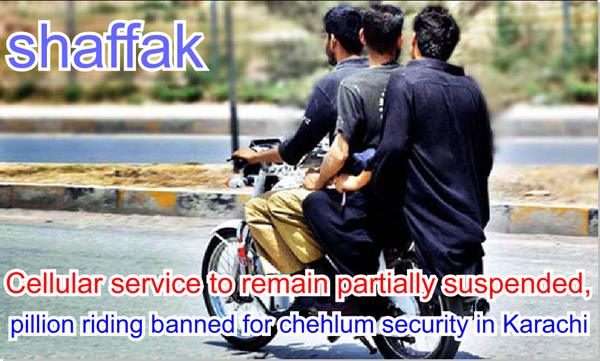 Walkthrough gates have also been installed at six entry points of the main chehlum procession which will be monitored throughout via CCTV cameras.

The city police chief said that mobile services would remain partially suspended on Sunday, particularly throughout the route of the main procession.

Separately, DIG Amir Farooqi, who oversees the city's East Zone, chaired a meeting pertaining to security during the chehlum at his office.

The DIG directed officers to remain present at their respective duty points and to not leave the same till the next order. He also issued directions for timely provision of food to the policemen deployed for security duty.

Ban on pillion riding, display of arms, gathering of people

Sindh Home Department has imposed a ban on pillion riding in Karachi and other parts of the province on the day of the chehlum, according to a notification issued by Home Secretary Abdul Kabir Kazi.

Apart from a ban on pillion riding, the provincial government has also imposed a ban on carrying/displaying of arms/fire arms, lathis (wooden sticks), hatchets, explosive material/crackers, and posters inscribed with political/religious slogans.

Furthermore, the playing/possessing of audio or video containing provocative speeches and initiating sectarian hatred, has been prohibited.

The assembly of five or more persons except for chehlum, tazia, or majalis has also been forbidden without permission of the concerned authority.

The home secretary explained that these measures have been taken on recommendations of the district administration and the police who have suggested that “keeping in view of the prevailing law and order situation, there is a need for foolproof security arrangements”.

The official notification, quoting the police, said that "information has been received through reliable sources that some terrorists/anti-state elements are planning to carry out sabotage/terrorist activities during the chehlum programmes to cause unrest amongst different ethnic/religious groups and disturb the peace and tranquility”.

Therefore, the government of Sindh has taken the said steps “in order to maintain law and order throughout the province of Sindh and to avoid any untoward incident”.