No plan to evacuate Pakistanis from China 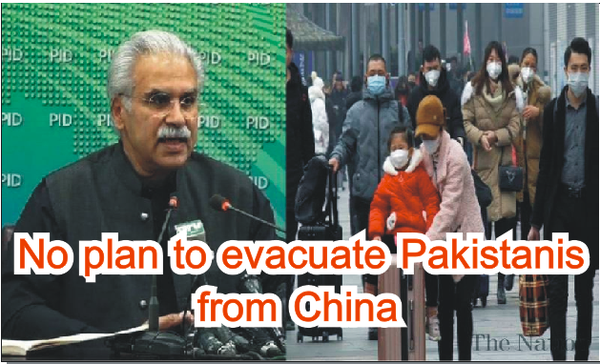 ISLAMABAD - Special Assistant to Prime Minister (SAPM) on Health Dr. Zafar Mirza on Thursday turned down the option of evacuating Pakistani students and families from China saying it could increase chances of virus spread. Focusing on the point of evacuation of Pakistani students and families in China, Dr. Zafar said at his press conference that such decision is ‘not in their own favour’. He said that in fact the Chinese government which has taken appreciable measures to control the spread has also not allowed evacuation of the citizens. “As per my information US has evacuated only its diplomats which is allowed under the Vienna Convention,” said the SAPM on health. He said that a decision of evacuation of the citizens in haste will lead to spread of the virus and it will be risky for the people themselves.

Dr. Zafar Mirza said that the Pakistani government endorses the Chinese government policies to contain and control the virus.However, he said that looking after the students in China is the responsibility of Pakistani government and it is doing its job at best level.He also said that when students and other Pakistani nationals in China will return to Pakistan, the government will take measures to examine the passengers and if required will take them in isolation for treatment.Responding to a query, he said that there was no restriction on air traffic to China, however, it was reduced after the spread of virus.

Informing about the health situation of four infected students with the Coronavirus in Wuhan, he said that all infected students are improving as they were diagnosed with the disease at the very early stage. “Students and their families have requested not to reveal their identities,” he said. Dr. Zafar Mirza also said that there are around 28000-30000 Pakistanis in China and the Pakistan embassy there is in contact with all registered citizens. He said that Pakistani citizens can contact and register themselves with the embassy so all unregistered Pakistanis should also get themselves registered with the embassy as soon as possible.

He said that World Health Organization (WHO) has also not recommended the evacuation option, while entire world has appreciated the Chinese government decisions in battling with the disease. He said that Chinese researchers also diagnosed the disease after the isolation of Coronavirus on January 07, 2020 and it has best facilities of treatment also. The SAPM on health said that all provinces are on the same page for tackling the disease as it can create a situation of national emergency if spread.

Dr. Zafar said that the Ministry of National Health Services (NHS) has also introduced a standard information communication system and published pamphlets in three languages including English, Urdu and Chinese for public information. He also said that information booths have been also been established at airports while the government will also start a campaign on television for awareness of general public regarding the virus.The SAPM on health said that the virus has so far spread in 15 countries but no case has been confirmed in Pakistan. He said that all the confirmed and suspect cases in the world had a travel history in China as well.

Dr. Mirza also said that core committee is daily conducting its meeting to review the situation of Coronavirus and measures to cope the situation. Meanwhile, a vast number of Pakistani students and families in China stressed the government of Pakistan to start an evacuation operation following the footsteps of other countries before they get infected with the coronavirus. Dozens of students at Urumqi airport of southern China informed The Nation that they are stuck here as the scheduled flights have allegedly been cancelled and Pakistani authorities are not addressing their concerns sufficiently.

“We are almost 150 Pakistanis including students and families stuck at the Urumqi airport since January 24 and have been left stranded,” said Danish Ashfaq from Sahiwal, who is a student at the University of Xuchang, Henan province. Danish said that their flights have been cancelled and the Chinese government has now arranged a hotel for them. He said that what is more disappointing is that his fellow passengers from Kirghizstan were allowed to fly to their home country from Urumqi but they were not allowed. He said “If other countries can lift their citizens then why Pakistan cannot?”

Danish said that Pakistani authorities in China are responding its citizens that ‘talks are underway’ to search a solution to their problems. Letter issued by Civil Aviation Authority (CAA) regarding air travel between China and Pakistan on January 29, 2020 and available with The Nation said, “Please be informed that as per decision of the competent authority at the appropriate level all direct flight operations between Pakistan and China are to be stalled on immediate basis, initially till 2nd February, 2020, subject to subsequent review”.

Dr. Zulfiqar Ali, a PhD Scholar from Tongji medical college, said that the virus is deadly than the past viruses that have caused outbreak in the Middle East in 2012 and in China 2002-2003. “My request to government of Pakistan is to take out its citizens on time otherwise it will be late and dangerous for Pakistan because the more the Pakistanis stay here the more they will get infected,” he said.

Meher-un-Nisa from Hubei and originally from Karachi said that there is a fear amongst the students now and they want to go back to Pakistan to remain save from the virus. She said there is no movement at all and they are wearing mask round the clock while the Pakistani government is not thinking to evacuate those who are not infected. Nadeem Bhukhari from Huazhong University of Science and Technology, Wuhan, said that situation is worse here and everyone has been isolated in their rooms. “Four students of my university were infected with Coronavirus and daily virus patients are increasing,” said Bukhari.