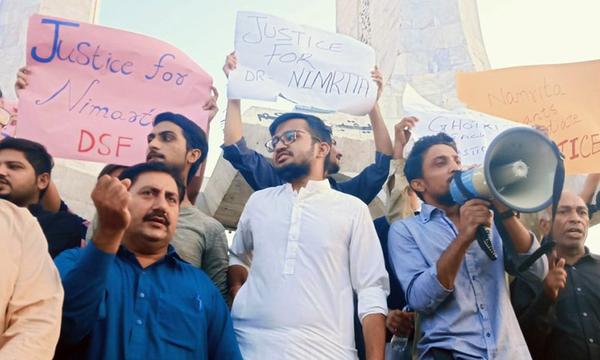 Civil society activists and members of the Hindu community are protesting in Karachi's Clifton area against the Sindh government's "failure to ensure the rights of minority citizens".

Protestors are staging a sit-in at Teen Talwar and carrying banners inscribed with slogans calling for the provision of justice for Dr Nimrita Chandani, who was found dead at a medical college in Larkana.

The main Clifton road is "partially" closed for traffic due to the protest, said SSP Nazeer. He added that the protesters were staging the sit-in at the side of the main road, therefore, the traffic was not diverted on alternative roads.

Nimrita, a BDS final-year student at Bibi Aseefa Dental College, Larkana was found dead in her hostel on Sept 16. The protesters have termed it as "a murder of a student belonging to the Hindu community".

They have demanded a judicial inquiry led by a judge of Sindh High Court into the death of the student. They have also urged the government to suspend the hostel warden and demand the issuance of a show cause notice to the vice chancellor of the medical university in Larkana.

The protestors have also called attention to the riots in Ghotki this week over an alleged blasphemy incident, in which a Hindu temple was vandalised and called for a judicial inquiry into the temple's desecration.

Nasir has complained of the provincial government's failure to take concrete action over the riots in Ghotki as well as Nimrita's death. He has also complained of the lack of a commission being formed to probe the Ghotki incident and and Nimrita's case being forwarded to the sessions judge in Larkana, despite the assurance that a high court judge would take up the matter.

"Sindh Govt fails to keep promise #JusticeForNimerta #GhotkiTemple. No commission announced for attack on Ghotki Temple and Session Judge directed to investigate Nimerta case while High Court Judge was committed," he wrote in protest on Twitter.

Sindh government’s home department on Wednesday requested the district and sessions judge in Larkana to conduct a "judicial enquiry" into the matter and furnish a report within 30 days "for taking further necessary action", according to an official notification.

On Tuesday night, the first demonstration calling attention to the protection of the rights of minorities was held at the same venue. It was brought to a halt when the authorities assured the protestors that a judicial probe would be ordered to ascertain the circumstances that led to the student's death.

Nasir while talking to media yesterday said that they had gathered "to demand justice for the medical student, action against the persons who desecrated the temple in Ghotki and forced conversion of Hindu girls".

He had criticised the political leadership and others who "meet with ‘Mian Mithoo’" (Mian Abdul Haq), a former PPP MNA from Ghotki who has been accused of being involved in the "forced conversion" of Hindu girls

Mangla Sharma, an MQM-P MPA who also joined the protest on Tuesday night, told Dawn today that the protesters were demanding "a judicial inquiry and a fair probe into the death of the girl and desecration of the temple (in Ghotki)".

The Sindh Assembly lawmaker said that it was also their demand to remove the vice chancellor of the medical university in Larkana as she allegedly gave an "irresponsible statement" when she said that the student had committed suicide without waiting for the findings of a proper probe into the matter.

Sharma further alleged that the VC, during her meeting in Ghotki with the relatives of the victim, also "misbehaved" with the media and others.