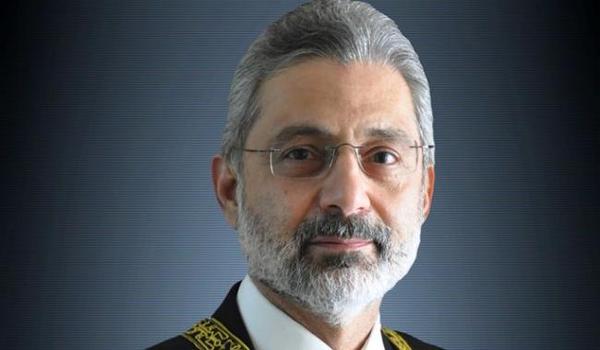 Chief Justice of Pakistan Asif Saeed Khosa on Friday ordered the formation of a full 10-member bench for the hearing of Supreme Court judge Qazi Faez Isa's petition regarding the presidential reference instituted against him.

Headed by Justice Umar Ata Bandial, the 10-member bench will conduct a hearing on Justice Isa's petition on September 24 at 1pm.

Earlier, Justice Isa had objected to a seven-member bench hearing the reference and had filed a petition requesting the formation of a new, full bench along with an expedient hearing to address his petition.

During the hearing of the petition, the counsel representing Justice Isa, Muneer A. Malik, had contended that the judges on the bench who might possibly benefit from the dismissal of this petition should kindly recuse themselves from the proceedings, in addition to three senior judges who were members of the Supreme Judicial Council (SJC).

Two judges of the seven-member bench — Justice Sardar Tariq Masood and Justice Ijaz-ul-Ahsan — subsequently recused themselves from hearing the case.

The petitioner judge had objected to the presence of Justice Sardar Tariq Masood and Justice Ijaz-ul-Ahsan since if he (Justice Isa) was impeached by the Supreme Judicial Council (SJC), Justice Masood would be elevated to the position of chief justice for six months till March 10, 2024, otherwise he would reach superannuation as judge. Similarly, in this scenario Justice Ahsan would become the chief justice in March 2024 instead of Oct 25, 2024.

A reference had been instituted in May this year against Justice Isa, accusing the judge of concealing his properties in the United Kingdom allegedly held in the name of his wife and children. After news of the reference hit TV screens, the judge wrote multiple letters to President Arif Alvi, asking him to confirm whether the reports were true.

Subsequently, another reference was filed by a lawyer from Lahore over the judge’s act of writing to and seeking information from the president, accusing him of violating the code of conduct for judges.

The Supreme Judicial Council (SJC), however, quashed the second reference as it did not find the matter "serious or grave enough to constitute misconduct sufficient for his [Justice Isa's] removal from the exalted office of a judge of the Supreme Court".