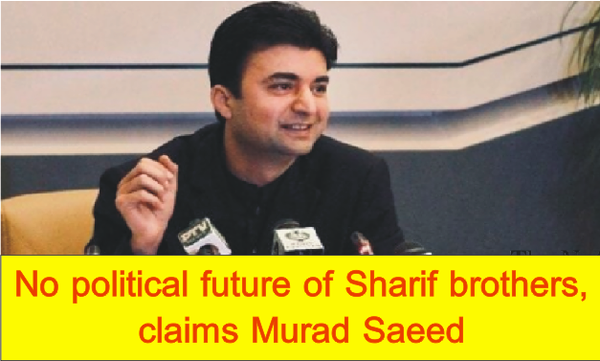 Minister for Communications and Postal Services Murad Saeed said Sunday that political future of both Sharif brothers is bleak and, will not survive due to being exposed in terms of corruption, kickbacks and nepotism. nIn a statement, the minister said that Shahbaz Sharif should learn from the mistakes of elder brother and provide answers of the questions of National Accountability Bureau(NAB).

He asked Shahbaz Sharif to advise his elder brother to return looted money of the nation. He said that Nawaz Sharif was hiding in London whereas his younger brother Shahbaz Sharif was hidden in Pakistan under the pretext of quarantine. The federal minister said that the elder brother committed corruption and money laundering with the help of Ishaq Dar while younger Sharif used the class mates of a son and personal employees as frontmen for whitening looted national wealth.

He said that the elder brother set up network of offshore companies but the younger Sharif used fake accounts for whitening black money earned through kickbacks and commission.Murad Saeed said that Nawaz Sharif used letter of Qatari Prince to justify his ill- gotten money and now Shahbaz Sharif was using the press conferences of his cronies in effort to save his skin.

He said that Nawaz Sharif looted national exchequer while sitting in the Prime Minister House while Shahbaz Sharif did the same as Chief Minister Punjab. Murad Saeed said that despite using all tactics and resources Nawaz Sharif could not prove his innocence, and Shahbaz Sharif would also meet the same fate. He said that like elder Sharif, cronies of Shahbaz Sharif had told him that the people would forget about their corruption but it will not happen as the PTI would not allow to happen this.