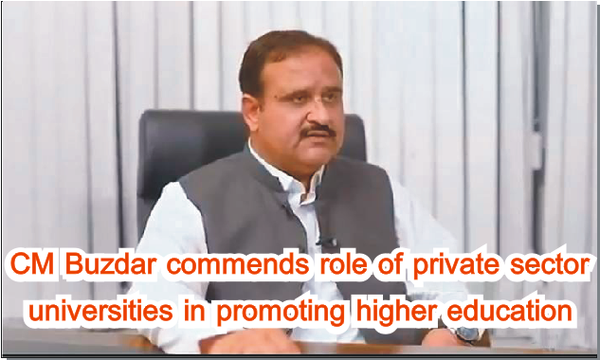 Punjab Chief Minister Sardar Usman Buzdar has said that role of private sector’s universities in promoting higher education in province is commendable. He was talking to Chairman All Pakistan Private Sector’s Universities Ch. Abdul Rehman who called on him at the assembly chamber here on Tuesday and discussed matters about the promotion of higher education in the province.

Usman Buzdar said that meeting of higher education reforms committee will be called soon and he will personally review the matters pertaining to this committee. Similarly, vacant posts will be filled in the higher education department according to need and pending cases will also be disposed of as soon as possible.

Punjab government is going to open educational institutions from September 15 and instructions have been issued for compliance of SOPs in all educational institutions to overcome the spread of the virus, he added. Speaking during the meeting, Ch. Abdul Rehman said that Punjab government was initiating durable steps to promote higher education and establishment of universities at the level of districts will further promote the higher education.