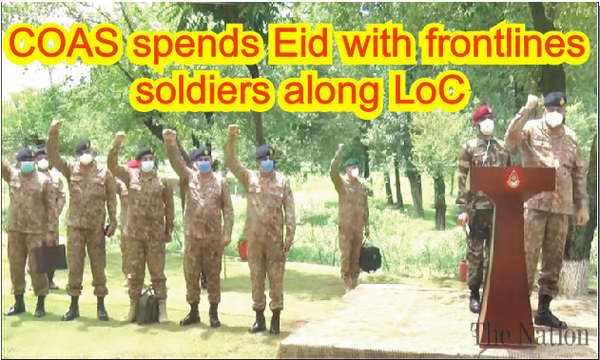 While interacting with troops, COAS said that Eid-ul-Azha epitomises the essence of unconditional sacrifice. “No one understands this spirit of sacrifice better than a soldier. Let us also reiterate our pledge to always stand by our Kashmiri brethren braving Indian atrocities for their right of self-determination despite all odds. The Pak Army Chief said, “We are aware of the enemy’s design to destabilise our country and this region. Pakistan Army is fully prepared and capable of thwarting any such covert or overt undertakings.”

Corps Commander Rawalpindi Corps, Lieutenant General Azhar Abbas received COAS at the LOC. Meanwhile, COAS also visited AFIC and NIHD (Armed Forces Institute of Cardiology And National Institute of Heart Diseases) and performed earth breaking of NEPCARD (NIHD Centre of Excellence in Prevention and Cardiovascular Research and Development) where indigenous research on heart diseases will be carried out including their preventive measures.