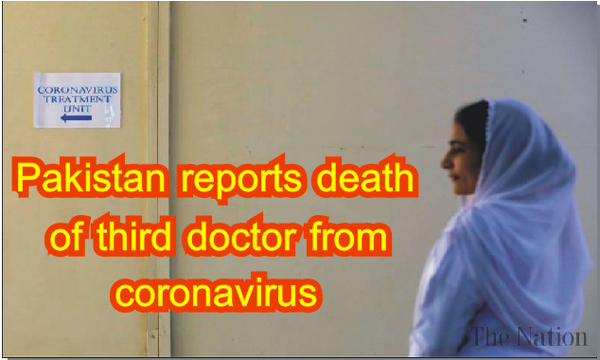 Pakistan on Monday reported the demise of another doctor from coronavirus, raising safety concerns among health professionals who have been complaining about lack of proper safety gears. Dr. Abdul Qadir Soomro, a veteran physician, breathed his last at a local hospital in southern port city of Karachi, becoming the third doctor in the country who succumbed to the virus. Soomro, 70 was the administrator of a charity hospital, run by Al-khidmat Foundation -- the country's one of the largest relief agencies -- in the eastern outskirts of Karachi, where he had established an isolation ward for suspected coronavirus patients, the Health Ministry said in a statement.

His death brought the number of casualties from COVID-19 to 52 in the country. The number of infection cases in the country has risen to 3,622 , as 397 news cases were reported over the past 24 hours. A total of 257 patients, of them 130 on Monday, have recovered, while 17 are in critical condition. So far, the Punjab province reported 1,816 cases, Sindh 932, Khyber Pakhtunkhwa 405, Balochistan 202, northern region of Gilgit Baltistan 210, the capital Islamabad 82 and Azad Jammu and Kashmir confirmed 15 cases of the coronavirus.

Meanwhile, the virus also spread into the country's jails, with 49 cases confirmed in jails of Punjab province alone. "We have 1,493 confirmed cases in Punjab, among them 49 are prisoners who are currently under quarantine," Usman Buzdar, chief minister of Punjab, said on Twitter.

Since appearing in Wuhan, China last December, the novel coronavirus has spread to at least 183 countries and regions, according to figures compiled by U.S.-based Johns Hopkins University. The data shows more than 1.29 million cases have been reported worldwide, with the global death toll nearing 70,800, and more than 270,300 recoveries.