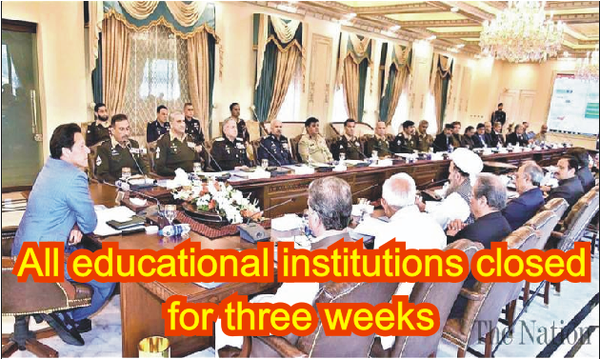 Islamabad/Lahore/Karachi  - As number of cases of COVID-19 pandemic has jumped to 28 in the country as of Friday, a crucial meeting of the National Security Committee (NSC) chaired by Prime Minister Imran Khan took several decisions to contain further spread of the conoavirus. The NSC meeting attended by the provincial chief ministers and the civilian and military leadership decided to close all the educational institutions till 5 April, closure of borders with Iran and Afghanistan and banning all large public gatherings. Later in a media briefing, Special Assistant to the Prime Minister on Health Dr Zafar Mirza accompanied by Dr. Firdous Ashiq Awan and Moeed Yousuf clarified that all the decisions taken by the NSC are safety centric.

Dr. Mirza while confirming that total number of cases of cornavirus as of Friday were 28 said that NSC has decided to follow a preventive strategy to curtail spread of the bug , therefore it was decided to close Pakistan’s border with Afghanistan and Iran completely for two weeks. He explained during this period, the system for screening and preventing further infections from entering the country will be made stronger. He said the first batch of pilgrims who have returned to the country from Iran has left for provinces after completing its 14-day quarantine period at the Taftan border.

The details of these pilgrims will be provided to the provincial governments, which can test or place the pilgrims under quarantine again. He said that a high-level National Coordination Committee (NCC) to stop the spread of killer bug in the country has been constituted which will hold its first meeting today (Saturday) at 4 PM. He said the committee will comprise of ministers, chief ministers, surgeon general of Pakistan Army, and representatives of DG ISI, DG ISPR as well as DG military operations. Health Minister has been appointed its convener while federal health secretary will perform his responsibilities as secretary.

It was decided during the meeting that only three airports in the country including Karachi, Islamabad and Lahore will be allowed to operate international flights (arrivals and departures), a move intended to reduce the entry points and ensure better arrangements there. Mirza said all large public gatherings will be banned, including weddings and conferences, for a period of two weeks. Cinemas will also be closed while all remaining Pakistan Super League (PSL) 2020 matches will take place in empty stadiums. The matter of whether religious public gatherings should be banned has been referred to the religious affairs minister and the chairman of the Council of Islamic Ideology.

They have been tasked with consulting with all stakeholders and give their advice to the government based on which a decision will be taken, Mirza said. He also clarified that all the examinations whether conducted through the Federal Board or else have been banned till further order. He said that The NSC also decided to give the National Disaster Management Authority (NDMA) the lead role in dealing with the coronavirus threat which will further coordinate with the PDMAs at the provincial level.

Mirza said the government will also request the chief justice to close civil courts and adjourn cases for a period of three weeks. Judicial magistrates and judges of session courts will be requested to decide criminal cases within jails while relatives of prisoners will not be able to meet them for three weeks in jails. A media campaign will be started to brief the public regarding coronavirus prevention measures and a system will be established to prevent misinformation and relay facts to the people from a “central” source. Speaking at the briefing, Special Assistant to Prime Minister on Information and Broadcasting Dr Firdous Ashiq Awan said government is committed to fight coronavirus pandemic in the country.

The Special Assistant said Prime Minister allocated responsibilities to all stakeholders and emphasized that each institution should come up with collective, unified national response. She further said that national parade scheduled for March 23 at Islamabad has also been cancelled. She urged the media to play its positive role in supporting the government strategy.

Moeed Yousaf said all the decisions of the NSC are meant for the safety, adding that in view of the emerging threat of the bug at global level Pakistan had to evolve its national response with utmost responsibility. He also called upon the people not to panic in any given situation and the government is alive tackle the growing threat.

OUR REPORTER FROM PESHAWAR ADDS: Meanwhie, the Khyber Pakhtunkhwa cabinet also decided to shut all state-run and private educational institutions for 15 days in view of the coronavirus risk.

After the cabinet meeting, the Chief Minister’s Advisor on Information Ajmal Wazir and KP Minister for Finance and Health Taimur Salim Jhagra briefed media about the cabinet decisions.

Ajmal said all schools, colleges and universities as well as hostels will remain closed while exams have been postponed. He said the prisons were also being sealed and visitors won’t be allowed to meet prisoners. “The chief minister has also cancelled his public meetings and tourism activities including Dera festivals have also been postponed,” he said.

GRANT APPROVED FOR HEALTH DEPT: On the occasion, Taimur Salim Jhagra said that for the health department, the cabinet had approved to release Rs500 million as immediate grant, Rs2 billion as supplementary grant and Rs8 billion for long-term measures Also, Punjab Chief Minister Sardar Usman Buzdar took important decisions to prevent spread of coronavirus and to enforce advance precautionary measures in the province.

The health authorities in Sindh on Friday confirmed one more coronavirus case in the province. The confirmation was made in a post on social networking platform Twitter by the provincial Health and Population Welfare Department. “#Sindh Health Department has a new case of #CoronaVirusPakistan. The 52-year-old patient arrived from Islamabad 2 days ago & was tested positive today. This brings the total number of cases to 15 in Sindh, out of which 13 are in stable condition & 2 have been discharged,” the department said. On Thursday, a new coronavirus case had emerged in Skardu, Gilgit-Baltistan, health department official Dr Shah Ramzan confirmed, bringing the country’s total number of cases to 20. According to the official, the 31-year-old had returned to Pakistan on February 25 after travelling to Iran. He noted that three cases of the virus have been reported in Gilgit-Baltistan so far. The positive diagnosis in Sindh Friday takes the number of coronavirus cases in Pakistan to 28. Two people tested positive for the virus have recovered, while the rest are under treatment.