China, US spar over origin of coronavirus 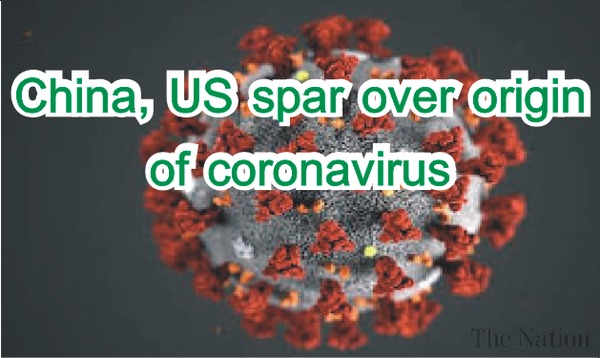 BEIJING- A Chinese government campaign to cast doubt on the origin of the coronavirus pandemic is fuelling a row with the United States, with a Beijing official promoting conspiracy theories and Washington calling it the "Wuhan virus." The spat comes as China tries to deflect blame for the contagion and reframe itself as a country that took decisive steps to buy the world time by placing huge swathes of its population under quarantine. With cases falling in China and soaring abroad, Beijing is now rejecting the widely held assessment that the city of Wuhan is the birthplace of the outbreak.

Foreign ministry spokesman Zhao Lijian went a step further on Thursday, saying on Twitter that " it might be US army who brought the epidemic to Wuhan " -- without providing evidence. He doubled down on his claim on Friday by posting a link to an article from a website known for publishing conspiracy theories about the 9/11 attacks.

Censors usually vigilant against rumours have also allowed Chinese social media users to spread similar claims about the US being behind the virus. A video showing a US health official saying some flu victims were posthumously diagnosed as having had COVID-19 was among the top searched items on China's Twitter-like Weibo this week, with some users saying it was evidence the virus originated in the US. Zhao posted the clip on Twitter.

Dali Yang, a political science professor at the University of Chicago, said he believes Zhao was "tweeting in his official capacity." China's intention in promoting the conspiracy theory is "to divert from domestic discontent" over the handling of the outbreak, which has killed more than 3,100 people in the country. Seafood market: The push to question the origin of the disease contradicts China's own initial assessment about the source of the virus, which has now killed nearly 5,000 people worldwide.

Gao Fu, head of China's Center for Disease Control and Prevention, said in January "we now know the source of the virus is wild animals sold at the seafood market" in Wuhan. Chinese authorities themselves saw Wuhan and the rest of Hubei province as a threat as they placed the region of 56 million people under strict quarantine to contain the epidemic.But Beijing began sowing doubts in late February, when Zhong Nanshan, a respected expert affiliated with the National Health Commission, told reporters "the epidemic first appeared in China, but didn't necessarily originate in China."