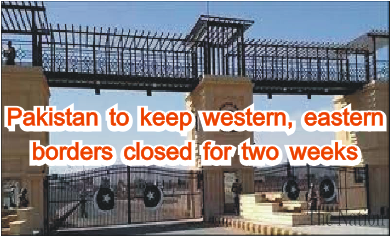 ISLAMABAD - Pakistan has decided to keep its western and eastern borders completely closed for another two weeks to prevent further spread of coronavirus. Special Assistant to Prime Minister on National Security Moeed Yusuf through a Twitter statement said that the National Coordination Committee (NCC) for COVID-19 that met on March 26 under the chair of PM has taken the decision of complete closure of borders for another fortnight. In his second consecutive tweet, he said that the NCC that met on Friday reaffirmed the government’s earlier decision to “keep incoming international air passenger traffic suspended till 4th April.” “We will open traffic gradually when we do re-open,” he added.

On March 19, Pakistan had closed Wagah Border for two weeks as part of its efforts to tackle COVID-19. The Ministry of Interior in an announcement had said that that the closure of border was in the best interest of both Pakistan and India as confirmed cases were rising day-by-day. On March 2, the government had closed the Pak-Afghan Border at Chaman following reports that new cases of coronavirus have been reported in the neighboring country. Pakistan had already sealed its border with Iran at Taftan since Feb 23 following the widespread pandemic there that has killed thousands.