Italy cracks down on citizens amid coronavirus lockdown 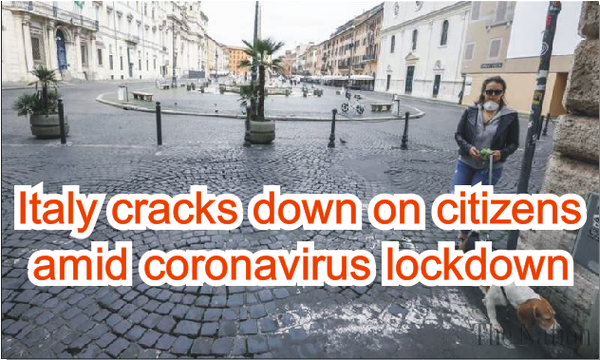 A rising number of infractions have pushed Italian authorities to take a firmer stance to enforce rules of an almost total lockdown aimed at limiting the coronavirus outbreak in Europe’s worst-hit country. More than 665,000 were subjected to checks between March 11 – 15, according to Interior Ministry’s data. More than 27,600 citizens and about 1,100 business owners were reported for violations during that time. In a desperate bid to curb the spread of the virus, which has already claimed more than 2,000 lives here, Italy's imposed a near-total lockdown, shutting down schools, bars, restaurants and all non-essential business activities.

Anyone exiting a residence needs to provide authorities a self-certification explaining the reason for the movement. These are allowed in just four cases: work, health, basic needs and in case one needs to travel to their own residence. A few businesses are exempt from the lockdown. Supermarkets among them, and grocery stores and big retail chains continue to provide deliveries, which are left a safe distance or on the front of a client’s door to avoid any physical contact.

Italians can also still go out to buy newspapers as newsstands remain open. All schools and universities have been closed until at least April 3, but teachers and professors are using internet resources to continue lessons. University exams can be conducted remotely or by using basic precautions of maintaining a minimum one-meter distance.

Gyms and most big parks have been closed, while public transport has been guaranteed, but with some limitations. According to recent data provided by the Italian Foundation of Work Consultants, about 3 million workers -- more than 13% of the workforce -- have been forced to stay home due to quarantine requirements. To protect those who have lost or risk losing their jobs, and shield the struggling Italian economy from a new recession, the government approved an economic package worth €25 billion, including babysitter vouchers for families and bonuses for some categories of workers.

The virus known as COVID-19 emerged in Wuhan, China last December, and has spread to at least 163 countries and territories. The World Health Organization (WHO) has declared the outbreak a pandemic. Out of over 197,000 confirmed cases, the death toll now exceeds 7,900, while more than 81,000 patients have recovered, according to Worldometer, a website that compiles new case numbers. The current number of active cases is more than 107,000 -- 93% mild and 7% in critical condition, according to the website. The WHO has declared Europe the new epicenter of the virus.