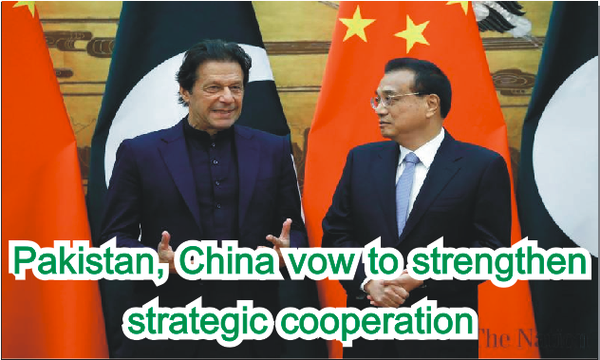 China and Pakistan have reaffirmed to further strengthen their “All-Weather Strategic Cooperative Partnership” aimed at building a community of shared future in the new era. The understanding reached during Pakistani President Arif Alvi’s two-day visit to China, which culminated on Tuesday, according to a joint statement.

Alvi, who became the first head of state to visit Beijing after the coronavirus hit the world’s most populated nation, met with his Chinese counterpart, Xi Jinping, Premier Li Keqiang and Chairman of National People’s Congress Li Zhanshu. The Pakistani president praised the relentless efforts undertaken by China to stem the spread of the coronavirus, and was confident that the Chinese people under the leadership of Xi will emerge stronger and victorious in the aftermath of COVID-19, the statement said. Xi thanked Alvi for visiting China at a critical time and expressed profound gratitude for Pakistan’s gesture of support and solidarity.

Both China and Pakistan underlined that COVID-19 is a common challenge for humanity and all countries should unite and cooperate to overcome this challenge together. The two leaders, the statement added, exchanged views on bilateral, regional and international issues of mutual interest. Both sides reaffirmed their support on issues concerning each other’s core national interests. The Chinese side reiterated solidarity with Pakistan in safeguarding its territorial sovereignty, independence and security.

Pakistan, for its part, reaffirmed its commitment to the One-China Policy and underscored that affairs related to Hong Kong and Taiwan were China’s internal affairs. Islamabad underscored that the China-Pakistan Economic Corridor (CPEC) would promote industrialisation and socio-economic development in Pakistan. Both sides reaffirmed their commitment to fight terrorism in all its forms and manifestations. China recognized measures taken by Pakistan to combat terrorism financing and appreciated the resolve with which Pakistan implemented the Action Plan of FATF, according to the statement.

China underscored that it was “paying close attention to the current situation in Jammu and Kashmir reiterating that the Kashmir issue was a dispute left from history, and should be properly and peacefully resolved” based on the UN Security Council resolutions and bilateral agreements. Both Pakistan and China welcomed the signing of the peace agreement between the U.S. and Taliban and hoped that the intra-Afghan negotiations would be the next logical step. During the visit, Alvi and Xi also witnessed signing of various agreements and memorandums of understanding, the statement concluded.