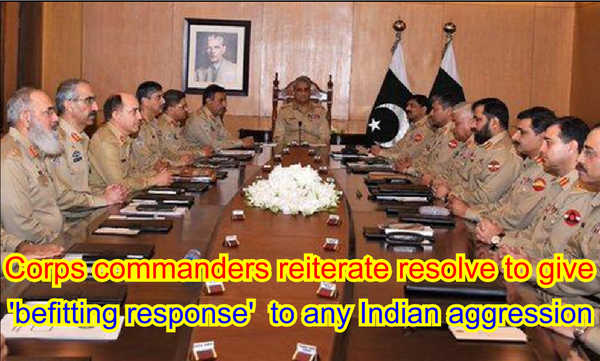 The military's top brass on Thursday reiterated its resolve to give a befitting response to any Indian misadventure or aggression directed towards Pakistan and not to make any compromises which deny the right of self-determination to the people of occupied Kashmir.

The resolve was expressed during a Corps Commanders Conference presided over by Army Chief Gen Qamar Javed Bajwa at GHQ today.

The Inter-Services Public Relations (ISPR) said in a statement that the meeting reviewed the “geostrategic and national security environment” along with the prevailing situation in Indian-occupied Kashmir, which has been under a crippling lockdown for nearly two months now.

It added that the Pakistan Army is "fully configured, prepared and determined" to defend the honour, dignity and territorial integrity of the country at all costs.

The forum acknowledged the government's effective highlighting of the Kashmir dispute at the recently concluded United Nations General Assembly session and its efforts to expose Indian human rights violations in occupied Kashmir.

It also expressed appreciation for effectively dealing with "foreign-backed efforts [aimed] at destabilising Pakistan through various machinations", according to the ISPR.

"Kashmir is the jugular vein of Pakistan and no compromise shall be made which denies [the] right of self-determination to our brave Kashmiri brethren,” the army chief was quoted as saying during the meeting.