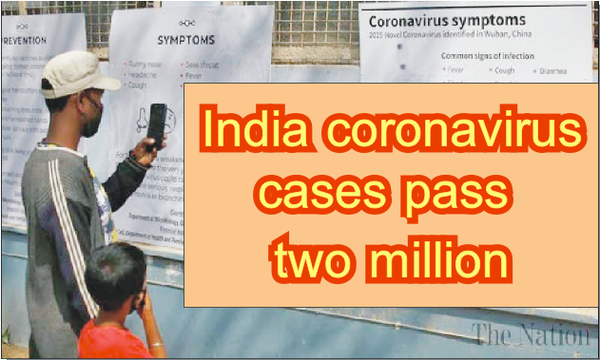 India’s official coronavirus case tally passed two million on Friday after a daily jump of more than 60,000. The South Asian giant becomes only the third country to reach the figure, after the United States and Brazil. The rate of spread in the world’s second-most populous country also appears to be increasing. India logged its first one million infections just three weeks ago. Official figures show the country has now recorded 2.03 million infections and 41,585 deaths. Many experts say the true numbers may be much higher among its 1.3 billion people, many of whom live in some of the world’s most crowded cities.

Spending per capita on health care is feeble by international comparison. Indian Prime Minister Narendra Modi’s government imposed one of the world’s strictest lockdowns in late March.But with Asia’s third-largest economy reeling -- tens of millions of migrant workers lost their jobs almost overnight -- the restrictions have been steadily eased. Individual states and cities have been imposing more localised lockdowns including IT hub Bangalore last month, the eastern state of Bihar and part of Tamil Nadu in the south. Previously the main hotspots have been the teeming megacities of New Delhi and Mumbai, home to some of the world’s biggest slums.

Now smaller cities and rural areas -- where 70 percent of Indians live -- have begun to see case numbers rising sharply. India has tested around 16,500 people per million, compared to 190,000 in the United States, according to a tally by Worldometer. A study last week that tested for coronavirus antibodies reported some 57 percent of people in Mumbai’s teeming slums have had the infection -- far more than official data suggests. A similar probe earlier in July indicated that almost a quarter of people in the capital, New Delhi, have had the virus -- almost 40 times the official total. Fatalities may also be higher than the official numbers. Experts say that even in normal times the cause of death is not properly recorded in large numbers of cases.